When millions of football fans plopped in front of their TVs, pulled up a stool at their local sports bar or filed into a stadium in Cincinnati on Monday night, no one was prepared to be gut-punched by the fragility of life. The stage was set for a Monday Night Football matchup with significant influence on the playoff picture. It began as an anticipated new year tradition but quickly became a terrifying nightmare.

There's no need to relive the trauma from Bills safety Damar Hamlin's collapse. There's more than enough collective trauma to go around. After my stomach was churning and I eventually changed the channel in an attempt to preserve my own stress response, my mind immediately flew to counselors and mental health professionals. Staring at the television and witnessing the looks on players, coaches, refs, fans and on-field personnel, I instantly thought: Please, please give these people resources. Because when life hits you with a soul-shaking reminder of the unpredictable reality of being human, humanity overshadows sports. It doesn't matter. It shouldn't matter. Life is more important than a game.

History has shown us repeatedly that sports can unite, and on Monday night there were no Bills fans or Bengals fans, no us versus them. People from all backgrounds, ages, identities, religions and fanbases came together to lift Damar Hamlin, his friends and family, the Bills organization, the NFL brotherhood and the medical professionals working on him with love, light, well wishes and prayer. The humanity encompassing the sports community right now is truly inspiring. 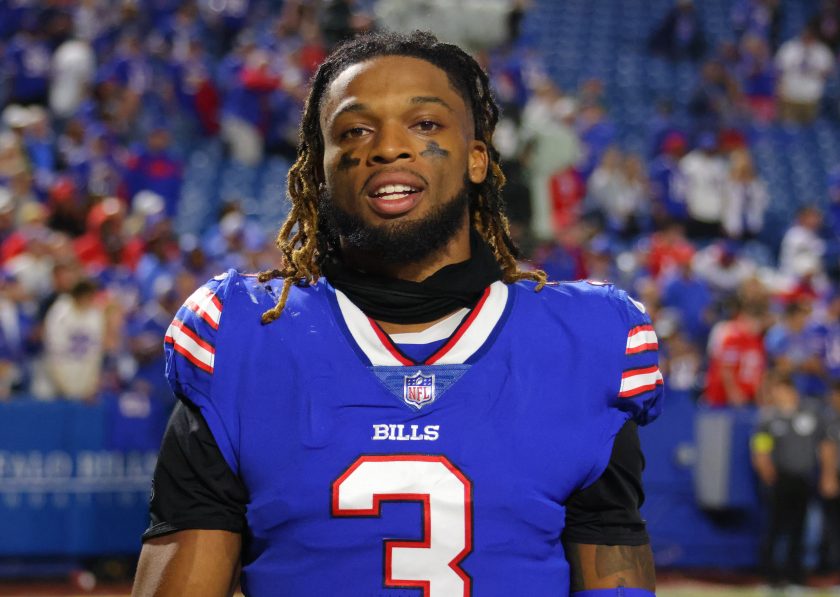 Social media can be a swirling toilet bowl of negativity and hate. A tool we could use for immense good is often hijacked for bigotry and division. Monday night, it became a lighthouse. Hamlin, the 24-year-old Bills safety, started a charity in 2020 after concluding his collegiate career playing at Pitt. According to the charity's GoFundMe page, The Chasing M's Foundation supports toy drives, back-to-school drives, kids camps and more. Hamlin has been passionate about giving back to the community: "As I embark on my journey to the NFL, I will never forget where I come from and I am committed to using my platform to positively impact the community that raised me," Hamlin shared. "I created The Chasing M's Foundation as a vehicle that will allow me to deliver that impact, and the first program is the 2020 Community Toy Drive."

A tweet suggested a beautiful way to honor Hamlin, as he was still being treated on the field Monday night, by donating to his charity. It went viral and, well, the response has been deeply moving. As of right now, the NFL sophomore's $2,500 goal has been blown out of the water, hitting $5.2 million and still growing. Some fans have even decided to donate their fantasy football league fees to the cause.

From CEOs to NFL legends such as Buccaneers quarterback Tom Brady, there have been a myriad of large contributors within the NFL community. However, there are hundreds of thousands of small donations from everyday fans across the globe. In a day and age when it's easy to be cynical, people are exhibiting the beauty in humanity and the uplifting power we hold as a society when we decide to do good and be kind.

Look For the Helpers or Be a Helper 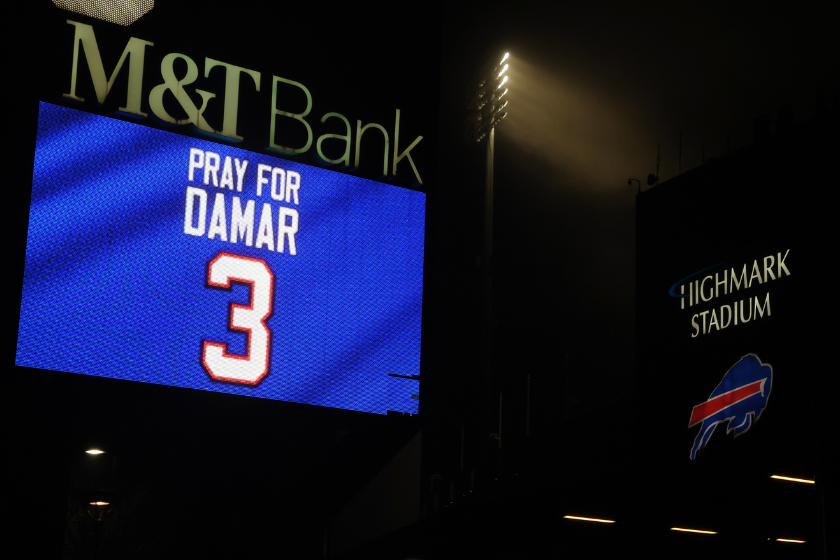 RELATED: How a Lacrosse Risk May Explain Why Damar Hamlin Collapsed

It feels nearly impossible to get Americans to agree on anything these days. We sorrowfully feel more divided than ever. Yet Monday night sports fans and people who've never watched a football game in its entirety were unified. Social media were inundated with pleas to the NFL to not resume the game, and people across the board were sending well wishes to everyone from Hamlin to Bengals wide receiver Tee Higgins (whom Hamlin tackled before collapsing), the emergency health care professionals working on the safety, and the entire NFL family. We were a banded bunch, desperate to put as much love and positive energy as we could muster out there to those who direly needed it.

Not only were fans widely sharing links to Hamlin's charity page for donations, but there were also sweeping reminders and calls to action for everyday people to get certified in CPR and AEDs (automated external defribrillators). The first responders' actions were crucial for Hamlin and ignited many a household conversation around CPR. The calls worked, as I found myself on a local site registering my husband and me for a class and finding very few classes left available. Something we'd been repeatedly putting off "till tomorrow" suddenly felt increasingly urgent. It hadn't even been a full 24-hour cycle, and already the collective trauma of life's delicacy colliding with a classically jovial Monday night pastime had already been sprinkled with humanity's goodness. The money raised for The Chasing M's Foundation will undoubtedly make a difference in Hamlin's community; and even if only a small portion of Monday Night Football viewers follow through with CPR certification, that's potentially hundreds of thousands to millions of lives saved.

It's natural to feel overwhelmed, scared and even triggered after watching the unexpected collapse and resuscitation of Hamlin on Monday night. Whenever I start to feel overcome by my feelings in times of stress or fear, I remember something Mister Rogers said: "When I was a boy and I would see scary things in the news, my mother would say to me, 'Look for the helpers. You will always find people who are helping.'"

And I'd add to that if you don't see any helpers and you're able, be a helper. In the palpable heartache and uncertainty during the Bills-Bengals game, I found myself looking for the helpers, especially after the shock of hearing Joe Buck declare that the players would have five minutes to warm up. Thankfully, the coaches and leaders within the Bills' and Bengals' organizations knew best how to help their players. They knew it was too much to ask them to take the field after the trauma they'd all endured. Those coaches and captains were helping the best they knew how in an unfathomable moment. There were people doing good all around. There are still good people doing good things, no matter how big or small.

It's Bigger Than Football 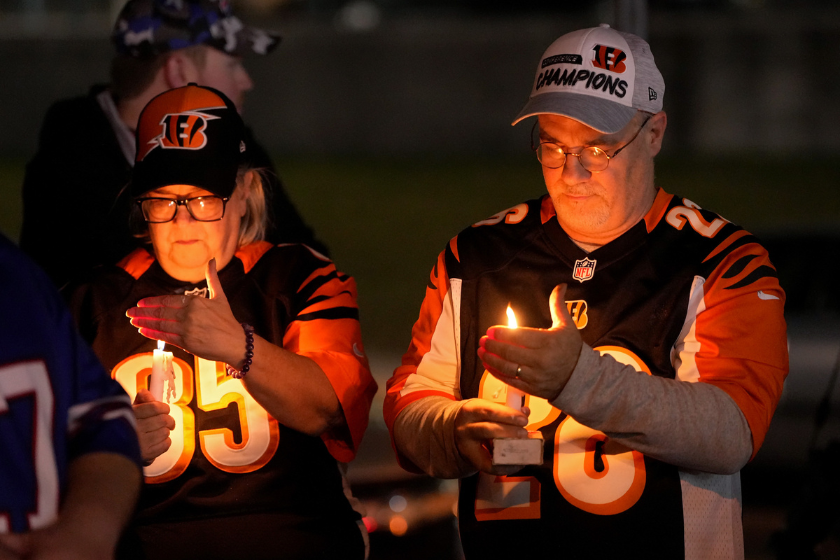 This moment is bigger than football, bigger than sports. This is about love and humanity. I applaud every sports commentator who was on the air Monday night. They were thrust into an unimaginable position, forced to both process the shock themselves, in real time, and guide viewers through an unprecedented night in NFL history. It isn't always easy being a human in this world, and we need the connection we gain from one another to get through the painful times -- we need the help.

Humanity is at its best when we are rallying together, supporting each other and helping each other. It may feel small donating $10 or tweeting well wishes, but those little acts add up to big acts. As someone who loves the world of sports and is fortunate enough to share my opinions on everything from fluffy puff stories and stats to player profiles and players accused of sexual assault, I'm unsure how we as writers, pundits, commentators or fans get back to the business of football.

We are all people carrying our own grief, trauma, pain, past, blessings and life experiences with us everywhere we go. We criticize each other without knowing what each other has lived or is currently battling. We assume we'll have tomorrow to apologize or next month to do that thing we've put off or hug that person we love. On Monday night, we were all forced to stare directly into the eyes of life's mighty uncertainty. We were forced to remember that this game we love is violent, unreliable and threatening. We were reminded that the men who suit up every week to play a game they love are putting themselves at risk. Yes, they know this, but that doesn't change the fact that they are human. The athletes aren't superheroes or gods -- they are men, and we must respect the game and the men who play it.

People are more important than profits, and my hope for the sports community as a whole -- and the NFL specifically -- is that we hold on to this outpouring of love and humanity, and we harness it for good. We should use this reminder to support the players more, work harder to make the game safer, and work together to build a world where we don't need to be overwhelmingly inspired by tweets of love or donations to charity because that is just our normal way of life. We shouldn't need tragedy or trauma to birth humanity. It is beautiful to see our diverse sports family unifying during this heart-wrenching time. And while it may still be unclear how the NFL will proceed with the season, we as fans should remain engaged with this profound humanness coursing through the league. Let's continue to send love, light, well wishes and prayers to Damar Hamlin, his friends and family, everyone within the NFL and our kindred sports community.

MORE: Damar Hamlin's Mom Has Always Been By His Side, From Pee-Wee Days to Tragedy