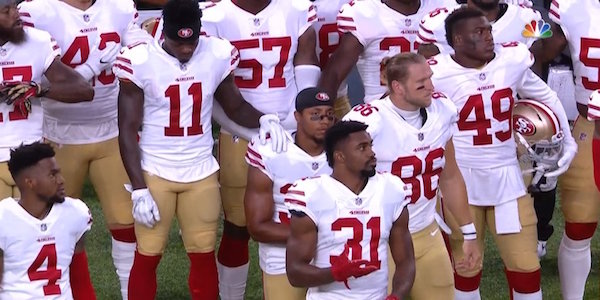 Many NFL players have shown their support of the National Anthem protests. Pittsburgh Steelers defensive lineman Dan McCullers isn’t among them.

On Sunday night, McCullers reacted to the following tweet which showed San Francisco 49ers safety Eric Reid kneeling during the anthem prior to his team’s preseason game against the Minnesota Vikings.

Eric Reid kneels during the national anthem with support from his teammates. pic.twitter.com/pE4JmvPpAO

“On that bulls##t” McCullers’ tweeted in response shortly after.

Pittsburgh has yet to have a single player participate in the protest since Colin Kaepernick’s initial demonstration last season.

Head coach Mike Tomlin told ESPN that part of the reason why every Steelers player stands during the national anthem is to honor teammate Alejandro Villanueva, a military veteran who received the Bronze Star following three tours of duty in Afghanistan, prior to the team’s season opener against the Washington Redskins in 2016.

“I know all of our players will be standing out of respect for their teammate, Alejandro Villanueva,” Tomlin said.

McCullers, who was drafted by the Steelers out of Tennessee in the sixth round of the 2014 NFL Draft, enters his fourth season with 27 total tackles and 1.5 quarterback sacks.