Some know him as the Hall of Fame NFL cornerback who won two Super Bowls across 14 seasons with the Atlanta Falcons, Dallas Cowboys and San Francisco 49ers, making "Prime Time" a sports sensation. Baseball fans may remember him as a speedy outfielder for the New York Yankees and Atlanta Braves. To others, he's an NFL analyst and the head football coach of Jackson State University.

No matter how you spin it, Neon Deion is one of the greatest athletes of all time. The trash talk king knows how to have a good time, too. From nearly pissing himself in a snake prank to teaching his players how to hit his signature dance, Sanders always gives fans something to talk or laugh about.

At 54, Prime Time is well past his prime and seems to be a more settled down man. The legendary former NFL player has five children and has been married (and divorced) twice. The good news for Sanders is he's dating a woman with a multi-million dollar net worth. 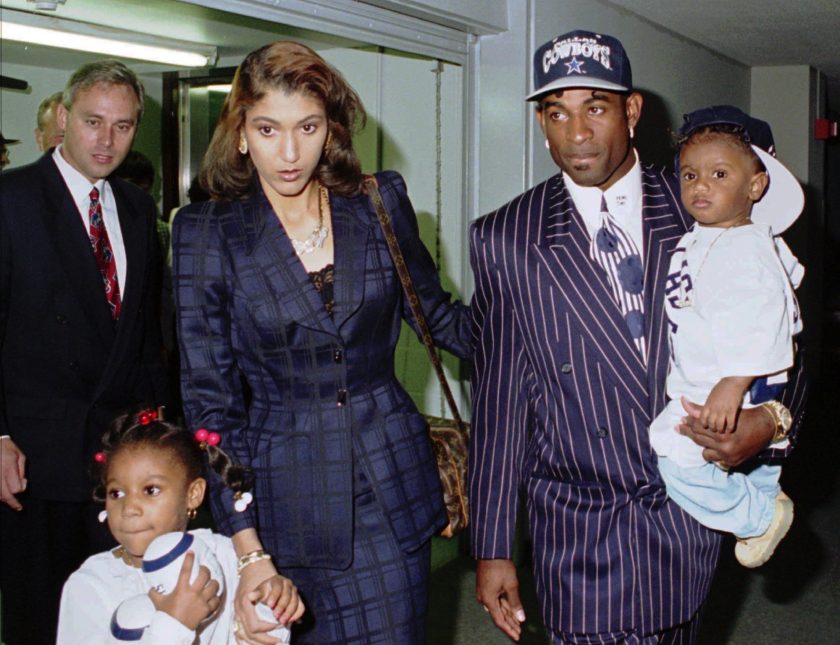 Deion Sanders married his first wife Carolyn Chambers in 1989, the same year he became the fifth-overall pick in the 1989 NFL Draft by the Atlanta Falcons. The two spent a decade together and had two children, Deion Sanders Jr. and Deiondra Sanders.

Near the end of his marriage in 1997, Sanders attempted suicide. He wrote in his autobiography "Power, Money & Sex: How Success Almost Ruined My Life" how he drove his car off a cliff and survived.

"I was going through the trials and tribulations of life. I was pretty much running on fumes," he said, via The Undefeated. "I was empty, no peace, no joy. Losing hope with the progression of everything."

When Deion and his second wife became entrenched in a custody battle, his ex-wife was called upon to testify. Chambers said in court that her first encounter with Pilar Sanders was Pilar calling her to tell her "I'm seeing your husband." 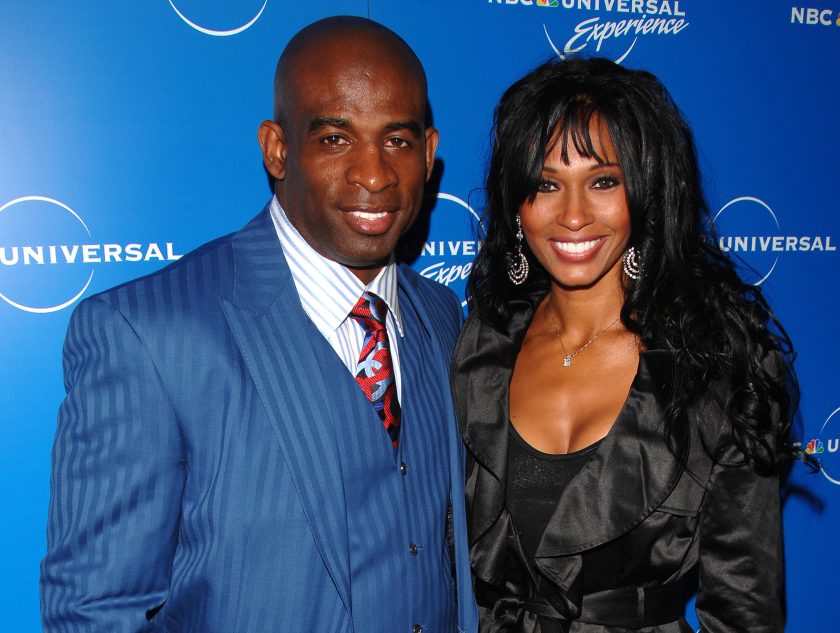 The former football player and his now estranged wife had three children -- Shilo, Shedeur and Shelomi -- over the course of their marriage. The Sanders also gave America a peak into their relationship on the reality show "Deion & Pilar: Prime Time Love," which aired on Oxygen in 2008.

Deion announced he was filing for divorce from Pilar in 2011, which began an ugly and messy process that lasted for the next few years.

The ugly and the messy? For starters, Pilar said she found out he was filing for divorce from TMZ. Then Deion's daughter, Deiondra, went on a pretty wild Twitter rant accusing Pilar on social media of being a "gold digging h**" whose boxes had been packed for weeks at their home in Prosper, Texas.

Deion was originally awarded primary custody of their two sons while Pilar would get their daughter in 2013. After a judge later awarded custody of their daughter to Deion, Pilar blasted and accused her ex-husband of domestic violence in the Collin County Courthouse, which led to the former Dallas Cowboy filing a defamation lawsuit against her. Pilar secured a victory in court in 2017, however, and Deion reportedly had to pay $1 million to her.

Pilar Sanders moved on by dating a man named J. Prince, the CEO of Rap-A-Lot Records.

Prime Time moved on, too. In 2012, the Hall of Famer began dating Tracey Edmonds, the former TV show host of "Extra" and CEO of Edmonds Entertainment Group Inc. worth a reported $60 million.

Edmonds formerly was married to Kenneth "Babyface" Edmonds for 13 years before divorcing in 2005. The Emmy Award-winning businesswoman even at one point called actor Eddie Murphy her fiance after the divorce.

Sanders and Tracy live in Texas together. He surprised her with a new jewelry box on an episode of "Tiny House Nation," during which they divulged how they make a long distance relationship work.

"Deion and I have a long distance relationship. I spend most of my time in L.A. and he's here in Dallas. So when it's my time to come to Dallas, I stay at Deion's house. It's very crowded. I'm really looking forward to this tiny house because it'll give us a chance to just find some us time," she said.

Deion was pretty blunt about how they spend their time when they're with each other.

"We spend time back in the bedroom and we walk to the kitchen, and then go right back to the bedroom," he joked during the episode.

Deion and Tracey quarantined together during the thick of the coronavirus pandemic in 2020. She posts to her Instagram often about the man she loves. She has high praise for the Florida State legend every Valentine's Day and Father's Day.

"@deionsanders... Baby, I am blessed that I get to watch you and be reminded through you how to stay strong and keep peace in life despite life's challenges, how to stay close to God and keep my Faith no matter what, and how to hold onto laughter. Your children have learned this from you and are truly blessed to have you! For the active Fathers out there, thank you for blessing your children with your presence and love! For the non-active Fathers... it's never too late to get involved and make a difference. Sending out LOVE!" she wrote.

Deion Sanders may be focused on coaching these days, but the NFL legend always finds a way to keep his face in the spotlight.