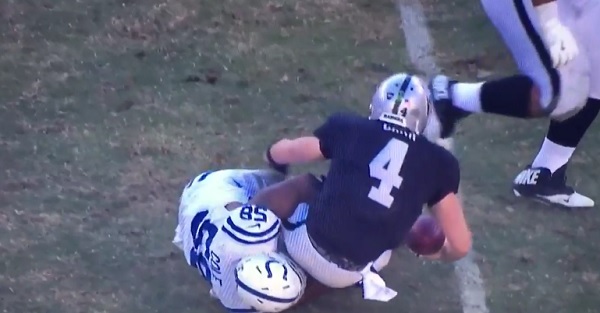 The Playoff race is the NFL may have just gotten more chaotic, and not for a good reason.

Oakland Raiders quarterback Derek Carr went down with a leg injury in the fourth quarter against the Colts on Saturday, as the star QB took a sack on a 2nd-and-22 with the Raiders leading 33-14.

Carr has his leg rolled up on during the play, and he immediately called for the medical staff once he was on the ground. The injury appears to be to the right leg, and the severity is currently unknown. However, any significant injury could keep Carr out of the Playoff entirely.

The Raiders are in the midst of their best season in over a decade, having already clinched the AFC West with an 11-3 record. The emergence of Carr had been a big reason behind the renaissance, and now the Raiders could be left scrambling if Carr is seriously hurt.