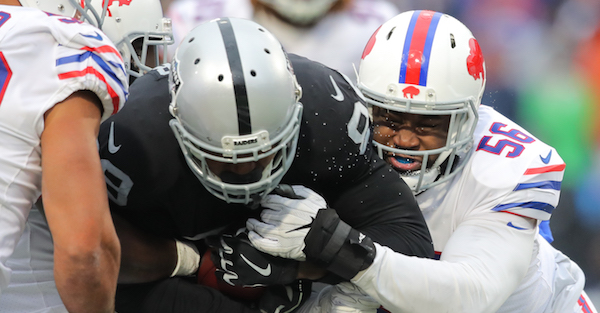 Expectations for the 2017 Oakland Raiders were through the roof and, in short, the team fell woefully short of meeting them on the field. While he certainly wasn’t the only problem, talented wide receiver Amari Cooper also had a disappointing campaign and, aside from a 210-yard performance against the Kansas City Chiefs on Oct. 19, 2017 was a disaster for the former top-five pick.

However, there could be a reason for Cooper’s struggles and quarterback Derek Carr illuminated it in speaking to Mad Dog Sports Radio. Carr outlined an injury for Cooper that included the fact that he was “playing on one foot” during the season.

?He will never tell you, and he?ll never even talk about it, but that man was out there playing on one foot. He?s out there just trying to battle for his teammates. A lot can be said about the way it didn?t work out, and stats and all those things, but the thing that I want to talk about is: I will roll with that guy any day of the week. He?s out there trying to give it his all, even though he could barely get out there and do it. That?s the kind of guy I want to play with. That?s how I know we?re going to be just fine.

?He would never say it to you, no one would ever say it to you, but I?ll say it to you to have his back. That man was out there playing as hard as he could and giving everything he could and, honestly, a lot of guys probably wouldn?t have even played with what he had going on. I commend him for what he was doing. We?re going to continue to work. We?re going to continue to do everything we need to do to be better, communicate, all those things, and going forward I?m pretty sure we?ll be just fine.?

Cooper exceeded 1,000 receiving yards in each of his first two seasons before cratering to just 48 catches for 680 yards in 2017. At the age of 23, that didn’t make a ton of sense and, in plain terms, Carr’s assertion that Cooper was playing at less than 100 percent supports the eye test in that Cooper did not play at a particularly explosive level.

2018 will be an interesting year for the Raiders and, if nothing else, Oakland might have a healthier go-to wide receiver as next season approaches.