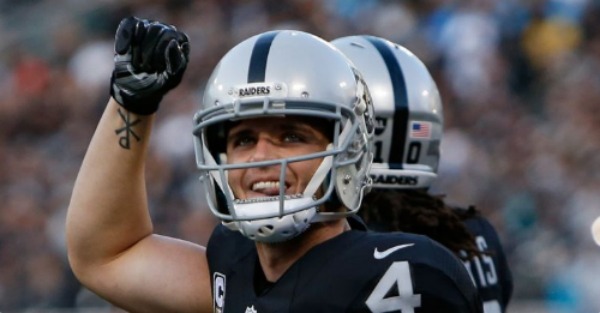 No, fingers aren’t supposed to bend this way. Unfortunately, Derek Carr’s did.

@NYDNSports @derekcarrqb Just pull it and it will pop back in. Did it mid basketball game a couple years ago.

And, here’s a closeup:

Oakland @Raiders QB Derek Carr’s finger injury is not for the faint of heart. https://t.co/SKVfDqeKR9

The injury happened in the third quarter of the game between Carr’s Oakland Raiders and the Carolina Panthers. Carr was behind center when the ball hit his hand and the pinky made a horrendous right turn. Carr told ESPN, “Probably some of the most pain I’ve felt in my life.”

After the injury, Carr ran off the field to the locker room, and Oakland fans no doubt were worried about their 25-year-old franchise QB. But Carr only missed one series, and re-entered the game wearing a glove on his throwing hand.

Derek Carr describes how much pain he felt from his gruesome finger injury https://t.co/5tRnDOzWbi #nfl pic.twitter.com/TxYlfKExkd

The Raiders haven’t said yet exactly what type of injury he suffered.

But it was painful. And ugly.