The dumb franchise is none other than the Cleveland Browns.

The Browns pulled a mind-blowing move by trading six future draft picks, including three first-rounders, for Houston Texans quarterback Deshaun Watson this offseason. With it, they started a snowball of identifying the right decision, laughing in its face and doing the complete opposite. It goes to show the Browns are willing to go to extreme lengths to break free from their disastrous history, essentially giving the middle finger to everyone Watson wronged.

The Haslams' Response to Watson's Suspension Shows Their Lack of Sentiment 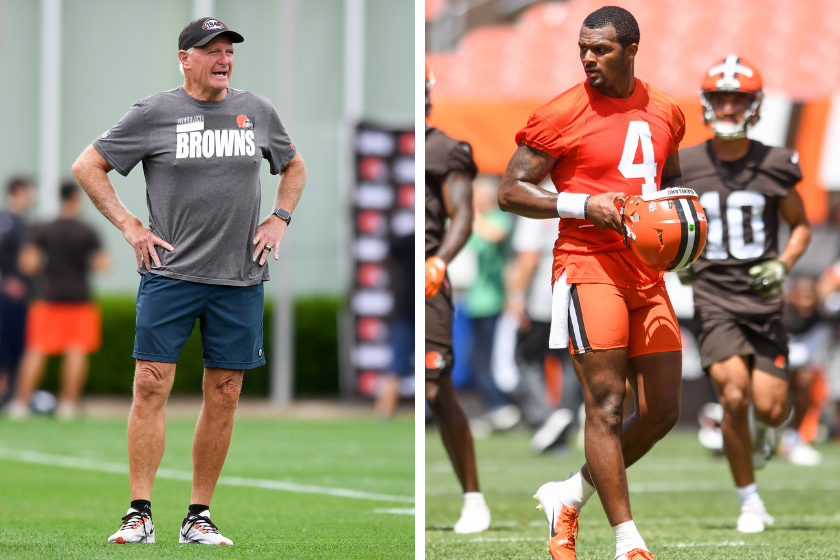 Yesterday, former federal judge Sue L. Robinson, who was jointly appointed by the NFL and the NFL Players Association (NFLPA) to review and hand out punishment for Watson's case, issued the Cleveland Browns quarterback a six-game suspension for the upcoming season. Six games for sexual assault, alleged or not, seems light, considering Atlanta Falcons wide receiver Calvin Ridley was suspended for the entire 2022 campaign for placing bets while he wasn't even on his team's roster and Arizona Cardinals wideout DeAndre Hopkins was given a suspension equivalent to Watson's for PEDs. As of now, Watson's suspension allows him to participate in training camp and preseason games. Financially, he'll lose $345,000 off his $1.035 million base salary. His megadeal kicks in next year.

It's human nature to be unable to grasp how someone who faced 24 sexual misconduct lawsuits from massage therapists (all but one have been settled) is given a lesser suspension than someone who placed a few wagers. But, the precedent the NFL has set for non-violent sexual assault -- like Jameis Winton's infamous Uber case in 2018 -- prompted Robinson's decision. The NFL's personal conduct policy isn't set up to handle a case like Watson's because it has never seen one of its magnitude before. Sure, there have been high-profile domestic violence cases like former Baltimore Ravens running back Ray Rice's and Kareem Hunt's, but Watson's case is classified as non-violent sexual conduct. Robinson explained Watson violated the league's personal conduct policy by engaging in sexual assault; by engaging in conduct that poses a genuine danger to the safety and well-being of another person; and by engaging in conduct that undermines or puts at risk the integrity of the NFL, per ESPN.

Given the public's reaction to the punishment, which the NFL has three-days to appeal, you can count on NFL Commissioner Roger Goodell laying down the hammer. They can't, under any circumstances, let six games be enough.

In response to the suspension, Browns owners Jimmy and Dee Haslam issued a statement with zero emotion that could double as a mad lib of apologetic buzzwords.

The key parts here is "We respect Judge Robinson's decision, and at the same time, empathize and understand that there have been many individuals triggered throughout this process." If you empathized with the "triggered individuals" you wouldn't have given Watson the most guaranteed money in NFL history. And triggered is just an awful word choice. They're devaluing any feelings Watson's victims and detractors have and classifying them as nothing more than complainers.

The second part worth noting is "We know Deshaun is remorseful that this situation has caused much heartache to many and he will continue the work needed to show who he is on and off the field, and we will continue to support him." Remorseful? Since when? Watson has vehemently denied he's done anything wrong. At a press conference in June, he said "I never forced anyone, I never assaulted anyone. That's what I've been saying from the beginning and I'm going to continue to do that until all the facts come out on the legal side." Well, Robinson's ruling begs to differ. I'm no lawyer, but Pro Football Talk analyst Mike Florio, who was a lawyer in a previous life, deciphered Robinson doesn't believe Watson told the truth in his testimony.

In her own words: "It is difficult to give weight to a complete denial when weighed against the credible testimony of the investigators who interviewed the therapists and other third parties."

I'm baffled this statement got by the PR team. Here's an alternate version of the aforementioned two sentences: "Our hearts go out to everyone who has been affected by this situation. Our franchise doesn't condone this kind of behavior, and we will do everything in our power to help Deshaun improve himself on and off the field." Instead, they doubled down. We shouldn't be surprised because it's par for the course.

Since the Browns traded for him, Watson's life has greatly improved professionally. They bailed him out of Texas, a place he desperately wanted to leave even though he inked a four year, $177.5 million contract in 2020. Then, they gifted him a fully guaranteed five-year, $230 million deal and brought on wide receiver Amari Cooper to be his top target. They were fully aware of his looming suspension and backlash, yet they proceeded.

I understand why the Browns went after Watson. The 2017 first-round pick is one of the best quarterbacks in the league, and they've had a bajillion starters over the past 20 years. But, apparently, the off-the-field baggage was worth it -- $230 million to be exact. There's a common saying about separating the art from the artist. The same can be applied to Deshaun Watson the football player and Deshaun Watson the person. When your organization is willing to look past accusers' statements that were validated in a court of law, you're only looking at the football player. Additionally, they have to live knowing all those women saw him rewarded with one of the richest contracts in NFL history, too.

Is the severe backlash for taking on a player involved in the biggest sexual assault case the league has ever seen worth a Super Bowl ring? Not even this year, but down the line? With a coach in Kevin Stefanski who's job security largely rests on Jacoby Brissett?

It is for the Cleveland Browns.