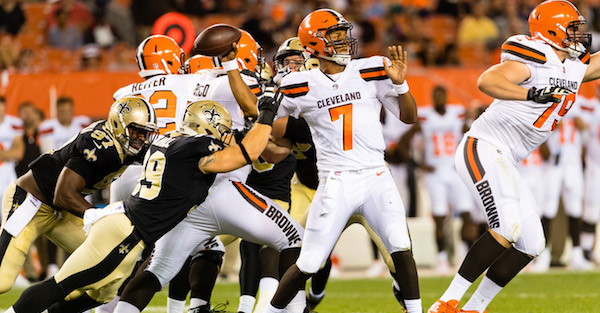 Jason Miller/Getty Images
CLEVELAND, OH - AUGUST 10: Quarterback DeShone Kizer #7 of the Cleveland Browns passes while under pressure from linebacker Adam Bighill #99 of the New Orleans Saints during the second half of a preseason game at FirstEnergy Stadium on August 10, 2017 in Cleveland, Ohio. The Browns defeated the Saints 20-14. (Photo by Jason Miller/Getty Images)

When the Cleveland Browns passed on quarterbacks like Deshaun Watson in the first round of the 2017 NFL Draft, many were quick to criticize the team’s front office. Then, in the second round, the Browns invested in former Notre Dame quarterback DeShone Kizer. And while that was not met with universal approval, it gave the Browns a (very) talented prospect to build with for the future.

The 6’4, 233-pound signal-caller was seen by many as a long-term project and, while the talent level is clear, Kizer looked overmatched in the early going. He completed just 50.9 percent of his passes while throwing nine interceptions (against just three touchdowns) and that play earned him a benching in favor of Kevin Hogan this week.

In the aftermath, it seems as if Kizer did not enjoy that. He was captured “liking” a tweet that called the Browns the “worst organization in the league.”

DeShone Kizer just liked a tweet saying “The Browns are and have always will be the worst organization in the league” #Browns pic.twitter.com/0A9dM25l9k

The optics of this are not good, even if Kizer is understandably frustrated. He was tagged in the tweet and could have conceivably been acknowledging the positive individual sentiment but, even as a rookie, he has to realize the negative connotation that goes along with this action.

Kevin Hogan is the guy for this week and, potentially, beyond but Kizer is the best quarterback prospect in the organization today. Now, we’ll see how he responds to everything but the first step after hitting the bench isn’t great.