Falcons star throws his old coach under the bus: “I was supposed to be the MVP of the Super Bowl” 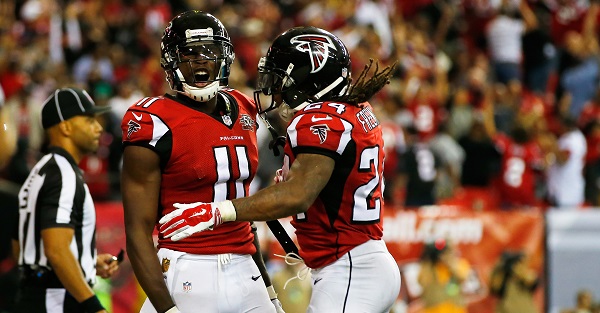 Kevin C. Cox/Getty Images
ATLANTA, GA - NOVEMBER 01: Julio Jones #11 celebrates with Devonta Freeman #24 of the Atlanta Falcons after scoring a touchdown to put the game into overtime during the second half against the Tampa Bay Buccaneers at the Georgia Dome on November 1, 2015 in Atlanta, Georgia. (Photo by Kevin C. Cox/Getty Images)

The Atlanta Falcons are still undoubtedly thinking about their mind-numbing Super Bowl loss but, for the most part, the team’s comments have been forward thinking as the 2017 NFL season approaches. With that said, running back Devonta Freeman, who is currently looking for a new contract, was asked about the “big game” by Bruce Murray and Brady Quinn of SiriusXM Blitz and he had some very interesting comments about his role during the contest. (h/t All22)

“I hate to go there, but I was supposed to be the MVP this year of the Super Bowl but it’s all good, we got another shot.”

Freeman rushed for 75 yards on only 11 carries and was, frankly, having a big-time performance before things went awry in the second half from a team perspective. One of the primary narratives surrounding Atlanta’s collapse was offensive coordinator Kyle Shanahan’s insistence on operating the offense in a more typical way, instead of simply running the ball into the ground by featuring Freeman and backup Tevin Coleman.

There were a few specific instances in which the public has jumped all over Shanahan, and Freeman’s reaction here speaks to that. Whether he would have been the Super Bowl MVP in an alternate reality is up for debate but his point is crystal clear and it would be tough to argue that the running back should not have received more carries in the second half.