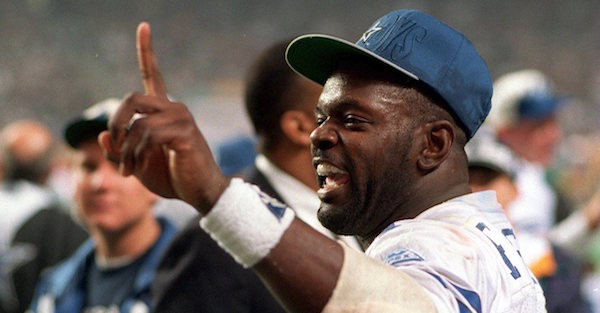 Jonathan Daniel/Getty Images
30 JAN 1994: RUNNING BACK EMMITT SMITH OF THE DALLAS COWBOYS FLASHES THE NUMBER ONE SIGN DURING THE COWBOYS 30-13 VICTORY OVER THE BUFFALO BILLS IN SUPER BOWL XXVIII AT THE GEORGIA DOME IN ATLANTA, GEORGIA. SMITH RUSHED FOR TWO TOUCHDOWNS AND WAS SELECT

Emmitt Smith should know a thing or two about winning championships in Big D, snagging three titles in four years during his run with the Cowboys.

On Saturday, Smith spoke on the current Cowboys team, pointing out the one area Dallas needs a lift:

Emmitt Smith says current Cowboys are a defensive line away from Super Bowl. Says line on his teams were bad to the bone.

Dallas has attempted to fix the defensive line over the last few years, using a failed attempt at rebuilding defensive end Greg Hardy’s career in 2015 and taking troubled defensive end Randy Gregory in the second round of the 2015 draft.

Gregory was already facing a 10-game suspension for his fifth substance abuse violation. Gregory failed a drug test at the NFL combine and failed two more last season before his last two, based on the NFL’s drug-testing policy.

Gregory had 11 tackles and no sacks as injuries held him back in his rookie campaign. He missed the entire 2016 season.

With the offensive side of the ball figure out, Dallas needs to attack the defensive position through the draft/NFL free agency in order to truly take the next step forward.

They were a middling defensive unit last season, ranking No. 13 overall with 36 team sacks.

Dallas picks No. 28 overall in the upcoming draft.