ESPN writer says defender should be suspended for the entire season for hit on Odell Beckham Jr. 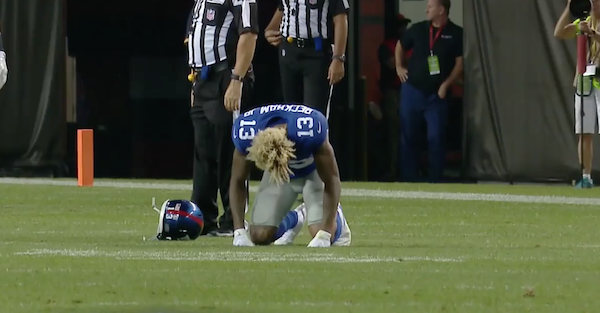 During his team’s Monday night tilt with the New York Giants, Cleveland Browns defender Briean Boddy-Calhoun went low on Odell Beckham Jr., apparently causing an ankle sprain on the hit. That resulted in an ESPN writer to say he should be suspended for the entire regular season:

If you do this in a pre-season game, you should be suspended for the ENTIRE REGULAR SEASON. pic.twitter.com/f67pxykqqB

Beckham didn’t make it to the back before collapsing in pain:

Odell goes down going back to the locker room pic.twitter.com/vFa4Jc5DAw

Beckham has more than 4,000 yards receiving in three years in the NFL, registering 35 touchdowns and averaging 95 yards per game.