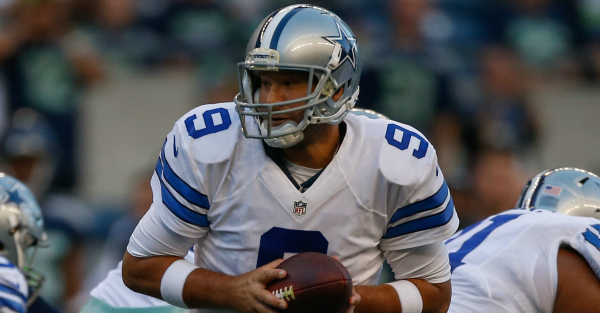 Now that it looks like Tony Romo’s situation in Dallas will end with his being demoted to the backup role when he’s cleared to play, speculation on his impending exit from the team is also beginning to take shape.

Via Steven Ruiz of USA Today, ESPN is forecasting that Romo’s days in a Cowboys uniform are likely to culminate with the 2016 season, and the Bears, Jets and Broncos are his potential landing spots.

All three are entrenched in tenuous quarterback situations, but Denver may be the most attractive option. The Broncos are fresh off a Super Bowl victory and have many more pieces in place than the Bears or the Jets. But there’s the issue of first-round draft pick Paxton Lynch, and whether or not sitting him behind Romo is even plausible.

RELATED: Cowboys hint at how they plan to use Tony Romo

Meanwhile, both New York and Chicago appear likely to part ways with quarterbacks Ryan Fitzpatrick and Jay Cutler at season’s end, as both are having awful campaigns and have their teams at the bottom of their divisions.

And Romo’s release would be about more than just rookie Dak Prescott. From a dollars and cents perspective, the Cowboys organization is poised to save $14 million of salary cap space for 2017 by cutting Romo after June 1. Add in Prescott’s meager (by comparison) $2.7 million salary over the next four years, and you can begin to understand how, in the end, it’s the team’s smartest play.