Every day, JJ Watt eats enough food to feed a family of four 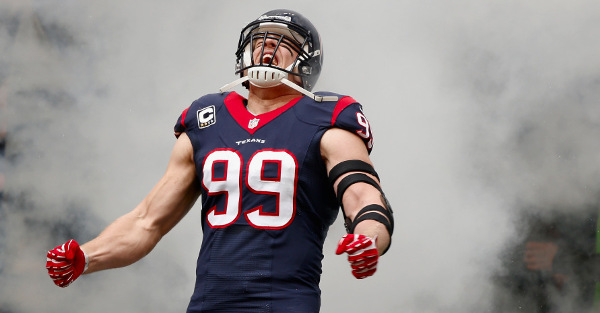 Peyton Manning #18 of the Denver Broncos drops back to pass during the first half of the game against the Houston Texans at Reliant Stadium on December 22, 2013 in Houston, Texas. *** Local Caption *** Peyton Manning

The 6-foot-5, 290-pound reigning Defensive Player of the Year needs to consume a lot of food to maintain that nightmare physique. It’s just amazing what “a lot” means to Watt’s caloric intake.

“I’m not strict on my calorie count, I just pay attention to my body. Over the years I’ve learned a lot about nutrition and about myself, so it’s a lot more based on feel. I stopped putting a number on it because people were analyzing it too much.”

I guess that’s fair, because who’s going to tell him to put down the fork? But where does it all go?

Here’s a breakdown of his daily intake, which may make you lose your lunch.

Looks like a two weeks worth of groceries for me.