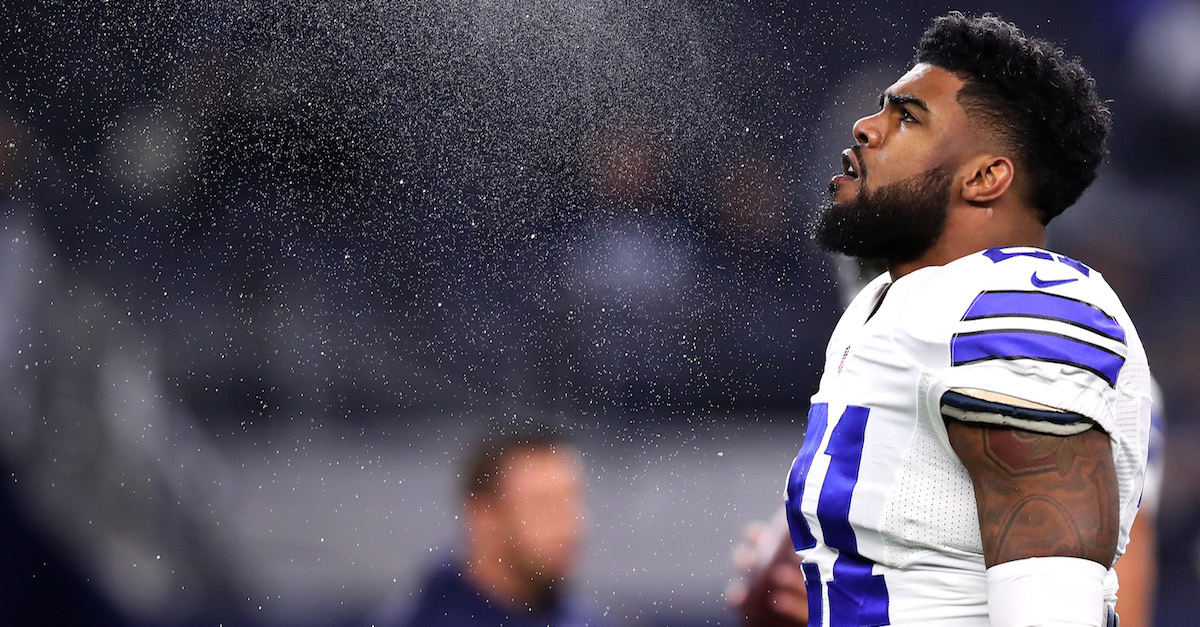 The NFL suspended former No. 4 overall pick Ezekiel Elliott for the first six games of the 2017-18 season stemming from an investigation into alleged domestic violence incidents, and after the 5th Circuit Court of Appeals reinstated Elliott’s suspension, so did the New York judge on Monday:

Before 6-game suspension, Zeke Elliott now has 24 hours to file in 2nd Cir, will argue restraining order stays in effect till appeal decided

No Zeke next six games. The next three games are huge for the Cowboys with Chiefs, Falcons and Eagles.

To summarize: Ezekiel Elliott is facing suspension in 24 hours, but this is not over yet. Is it ever?

With the 2nd Circuit decision in Brady in its pocket, the NFL now holds all the high cards. Deeply unlikely that Zeke will escape suspension pic.twitter.com/7EOJwBo5AE

The announcement comes after Elliott’s original appeal of his six-game suspension was upheld.

Elliott is expected to miss time until he can get to the 2nd Circuit Court of Appeals, per Pro Football Talk.

Elliott hasn’t missed a game thus far this season while the appeal process has played out.

Elliott has rushed for 690 yards over seven games, scoring six touchdowns on the ground and two through the air.

According to Clarence Hill of the Fort Worth Star-Telegram (H/T PFT), the league’s lead investigator Kia Roberts recommended no suspension and testified that during an appeal hearing following interviews with Elliott’s ex-girlfriend.

To make matters worse, Roberts’ recommendation never made it into the league’s final report, didn’t make it into the official suspension letter and she was reportedly banned from attending the meeting with NFL Commissioner Roger Goodell by senior vice president of investigations Lisa Friel where they discussed punishment for Elliott.

It was knowledge of Roberts’ recommendation and reported assurance from an NFL exec that left team owner Jerry Jones “furious” after the decision, according to the report.

ESPN’s Adam Schefter reported there is a “real chance” Elliott gets his suspension reduced.

Schefter discussed there is “sworn testimony” out there and it could lead to Elliott getting less time.

The appeal process comes on the heels of the NFL releasing a statement on its decision.

“Over the past few days we’ve received multiple reports of the NFLPA spreading derogatory information to the media about the victim in the Ezekiel Elliott discipline case.

It’s common tactic to attempt to prove the innocence of the accused by discrediting the victim — in this case Ms. Thompson — when coming forward to report such abuse. Common or not, these tactics are shameful. Efforts to shame and blame victims are often what prevent people from coming forward to report violence and/or seek help in the first place.”

Charles Robinson of Yahoo Sports obtained a report from the NFL that cites Elliott’s accuser, Tiffany Thompson, exchanging text messages with a friend in what appears to be a plot to extort Elliott through the use of video footage of sexual acts.

“[Thompson]: What if I sold mine and Ezekiel’s sex videos

[Friend]: We’d all be millionaires

[Friend]: We could black mail him w that

[Thompson]: I want to bro

[Friend]: Id be like look give me 10k or I’ll just sell our sex videos for the same amount flat

[Friend]: Me and my friends tryna go on vacation and get boob jobs

(the report notes a pair of blank texts)

When reached for comment for the story, Thompson’s friend said the following to Yahoo:

“I have literally no comment on that. I already spoke to somebody about that. It was an investigator. It was like, someone working for the NFL. It was like years ago, so I don’t even remember what I said.”

It is (very) important to note that this exchange does not rule out the allegation of abuse but, in the same breath, it could bring credibility issues that Elliott’s team could attempt to use in the appeal of the suspension. At the very least, the information coming to light in the public is not ideal from an optics perspective, especially given the strong response that both Elliott and his agent have put forth after learning of the suspension.

Back in early August, according to Ian Rapoport, the league threatened “potential banishment” for any additional violations: