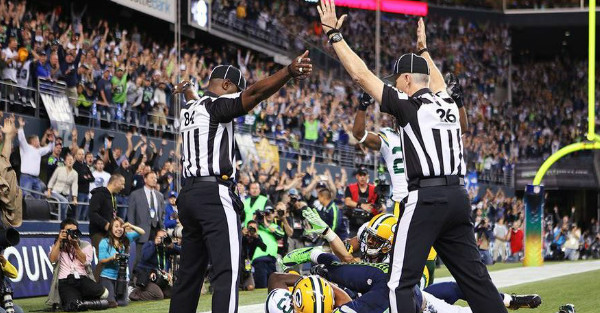 On the final play, Easley ruled that Seattle scored a touchdown after Golden Tate wrestled the ball away from Packers defensive back M.D. Jennings. The other referee, Derrick Rhone-Dunn, called the play an interception. Seattle was awarded the touchdown and won the game 14-12.

Easley was the subject of tremendous criticism from players, coaches, fans and even presidential candidates Mitt Romney and Barack Obama mentioned the notorious call. While the majority of America has gotten over the call, Easley deals with the remnants every single day.

“Right now I’m just trying to keep my life together,” Easley told Yahoo Sports in a series of interviews just as the focus on the Fail Mary returns with the Green Bay Packers and Seattle Seahawks meeting Sunday for the NFC championship. “It’s really difficult.”

He’s suffered panic attacks, severe depression and was scared to leave his home because of the numerous death threats he received.

“It’s almost like a funeral,” Easley said. “In the days around it you have a lot of support and you make it through. But as time goes by, you still have to process [the loss of a loved one].”

Throughout this time, Easley felt like he wanted to take his life so he didn’t have to suffer anymore.

“I felt like I didn’t want to be here anymore,” Easley said. “I never acted on it. It was horrible to have those thoughts. I hated having those thoughts.”

This entire thing is just very sad. I hope that Easley can pull it together and come back stronger than ever and feel happy again.