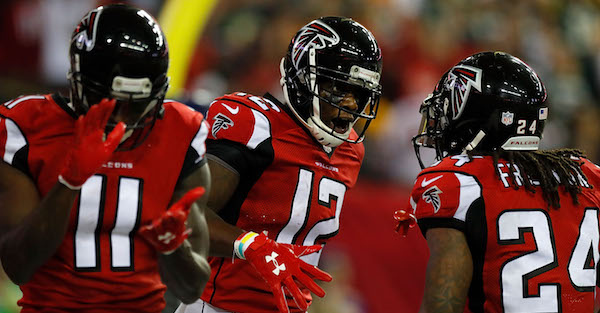 The Atlanta Falcons’ Super Bowl meltdown against the New England Patriots was the worst in NFL history, and players and fans still haven’t gotten over it.

Related: Matt Ryan reportedly had one clear message to his coach as the Falcons suffered an epic Super Bowl collapse

During an interview with NFL Network, Falcons receiver Mohamed Sanu said the elongated halftime performance from Lady Gaga had an impact on the Falcons.

“It definitely did,” Sanu said. “Usually, halftime is only like 15 minutes, and when you’re not on the field for like an hour, it’s just like going to work out, like a great workout, and you go sit on the couch for an hour and then try to start working out again.”

Halftime for NFL games is 15 minutes, but halftime at the Super Bowl is over 30 minutes. Sanu said there was no way to prepare for that long of a break.

Most fans have blamed Kyle Shanahan, and former Falcons receiver Roddy White also blamed Shanahan. Sanu didn’t go that far, but he opted for the halftime excuse instead.

“I mean, the thought crosses your mind,” Sanu said about Shanahan’s second half game plan. “But as a player you’re going to do what the coach wants you to do. He’s called plays like that throughout the season all the time. He’s been aggressive, we’re an aggressive offense, so we go out there and we do what we do.”

The Super Bowl halftime is hard to account for, but blaming that for blowing a 28-3 lead is a bit shortsighted.