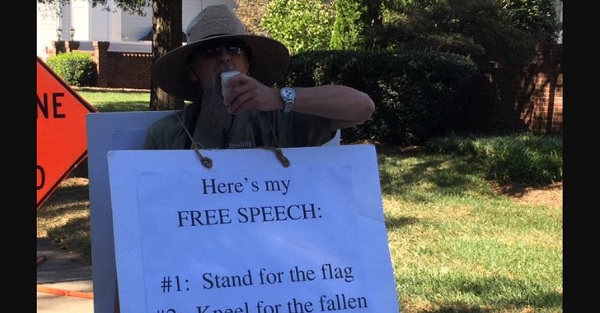 Following a rise in NFL players taking a knee during the national anthem in recent weeks as a form of protests, at least one fan has responded by taking his own protest directly to an NFL team.

On Wednesday, a picture was posted to Twitter of one football fan — apparently a season ticket holder — who received a permit to protest outside of the Carolina Panthers’ practice.

Protester outside Panthers practice. Says he's a PSL owner. Got a permit to be here for an hour. pic.twitter.com/z3I2JuvjRc

The comes after comments from President Donald Trump sparked widespread outrage from the NFL ahead of their Week 3 matchups. Several players protested by taking a knee, while other teams locked arms as a sign of unity. A few teams outright declined to take the field for the pregame national anthem ceremonies.

As for this fan, it looks like he is fed up with the protests, and is now taking his own right to protest to the streets.