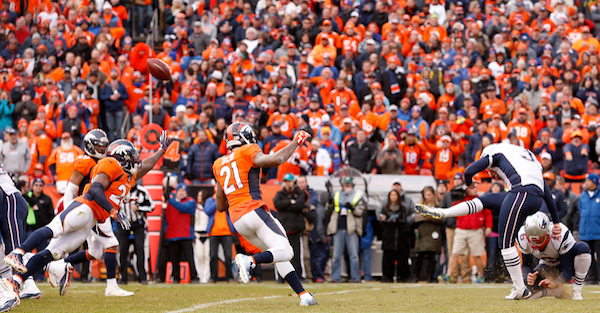 DENVER, CO - JANUARY 24: Stephen Gostkowski #3 of the New England Patriots kicks a 38-yard field goal held by Ryan Allen #6 in the third quarter against the Denver Broncos in the AFC Championship game at Sports Authority Field at Mile High on January 24, 2016 in Denver, Colorado. (Photo by Christian Petersen/Getty Images)

Kicker Stephen Gostkowski missed an extra point in the first half of the Patriots’ AFC Championship loss to the Denver Broncos. New England lost by two points following a failed two-point conversion.

@gostkowski can I punch your trash ass I'm the face? Missing a free point and putting us in that situation. Fuck you…

@gostkowski I hope you kill yourself stupid piece of shit. You had one fucking job.