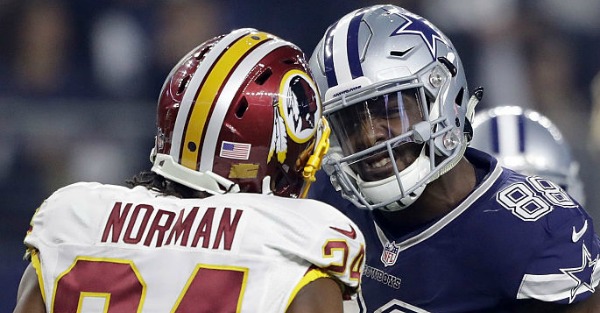 Washington Redskins cornerback Josh Norman has a knack for getting deep under the skin of some of the wide receivers he does battle with.

Last season it was Odell Beckham, Thursday night it was the Cowboys’ Dez Bryant. In both instances, things went so askew that officials had to warn them to get their behavior in check.

But on Thanksgiving night, the tension between Bryant and Norman boiled over to such a degree that while everyone else was shaking hands after the game, they were just inches away from throwing hands.

.@DezBryant and @J_No24 getting into it after the game!! pic.twitter.com/QcSqCSxSET

Norman said afterwards that Bryant was the aggressor, and Bryant suggested the same about Norman. But video replay after video replay shows that Norman was at the brunt of the dirty play, often getting one last shove or one last hit in after the play had ended, once even kicking at Bryant’s hands as he tried to get up off the ground after a catch.

Josh a chump for that RT @DCBlueStar: looked like he was trying to step on his fingers. IDK. @BenRogers pic.twitter.com/3X02G9FPm9

RELATED: Dez Bryant may have some trouble from the league if he really threatened Josh Norman

Another replay shows Norman employ the same sort of rough-housing he used on Beckham last year, twisting and pulling at Bryant’s leg after the play had already ended.

Norman did a hell of an acting job in his post-game interview, deflecting blame when he was clearly the instigator.  But you can’t argue with video and just like Beckham before him, it appears Bryant was just reacting to Norman’s unnecessary antics.