Forget Ryan Fitzpatrick, this quarterback is available and teams should be calling 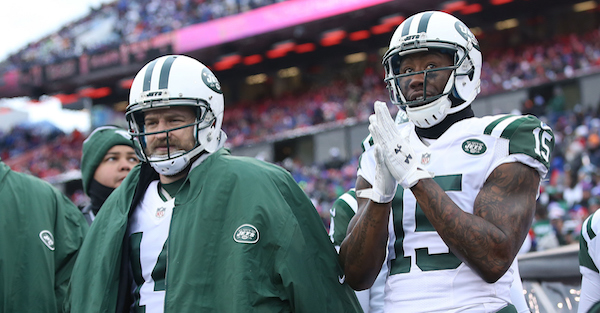 ORCHARD PARK, NY - JANUARY 03: Ryan Fitzpatrick #14 of the New York Jets and Brandon Marshall #15 of the New York Jets watch the game against the Buffalo Bills from the sidelines during the first half at Ralph Wilson Stadium on January 3, 2016 in Orchard Park, New York. (Photo by Tom Szczerbowski/Getty Images)

Robert Griffin III signed with the Cleveland Browns on Thursday, and that could have a trickle-down effect throughout the NFL.

The Browns hold the No. 2 overall selection in the NFL Draft, and with a clear need at quarterback, Cleveland could take their choice of Carson Wentz or Jared Goff, while allowing the former Heisman winner to develop in their system. That leaves veteran journeyman Josh McCown — due right around $5 million in 2016-17 after starting eight games for the Browns last season — as expendable.

The obvious connection would be with the New York Jets, who seem willing to explore every possibility other than turning to Geno Smith at quarterback. Ryan Fitzpatrick is reportedly commanding around $7 million per year over three seasons.

Denver could make things interesting and drive up the price for McCown, as their quarterback situation isn’t much better after recently acquiring Mark Sanchez. Throw in Los Angeles as well, holding Case Keenum as the starter, and McCown could be the prize acquisition of a light talent pool.

The timing couldn’t have been worse for Fitzpatrick, who expected to cash in this summer.