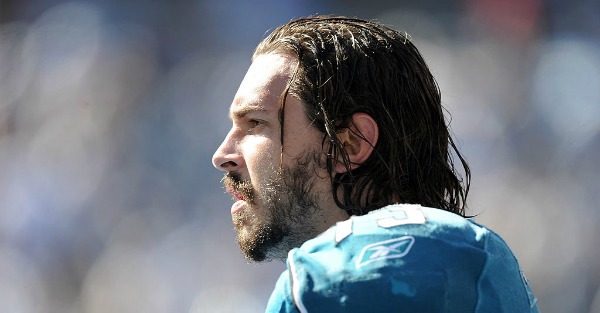 A former NFL offensive lineman is making some startling claims.

Eben Britton, who played six seasons from 2009-14 with the Jacksonville Jaguars and Chicago Bears, says he not only smoked marijuana between games routinely, he also played high on several different occasions.

“NFL games I played stoned were some of the best games I ever played. Cannabis cements your surroundings,” Britton told the New York Post. “A lot of people say they’re useless when they smoke weed. But hell, I played NFL games [while stoned], dude. My performances were solid and I felt really good after.”

Britton said his aim in frequently using marijuana during the season was to combat “psychological distress or sciatica or pain in my shoulders.” And he’s far from alone. Britton says it’s the same reason a majority of NFL players smoke marijuana. He estimates that as many as three-quarters of the league’s players use the drug, a number that may be substantiated by the sheer number of players hit with unspecified substance abuse violations week in and week out during the season. Sports agent Brian Fettner echoes this belief, suggesting that the term unspecified “almost always means marijuana.”

The idea that pot can effectively fight the chronic pain that accompanies a career in the NFL is also backed by science. Dr. Sue Sisley, M.D. recalled a patient with a rotator-cuff injury for whom nothing was as effective as marijuana.

“Nothing gave him relief — including opioids,” she said. “He was on the bench because he was nonfunctional on the field. Side effects from the medicine had him so sedated that it was literally dangerous for him to play. He was frustrated and lost his position and lost credibility. He tried cannabis and actually got back in the game. He is currently playing now. That is a common scenario.”

Examples of players being open about their marijuana use while active in the league are many. Former All-Pro running back Ricky Williams could be the country’s most infamous pothead pro athlete. Rumored to have failed a third drug test while with the Miami Dolphins in 2004, Williams chose to retire rather than face a mandatory suspension. He returned to football a year later, but was ostracized by the NFL and the public for essentially choosing marijuana over football. After retiring from the league in 2011, Williams opened up about fighting the chronic pain associated with football by using marijuana, noting that with its regular use he found a pain relief alternative that worked in ways painkillers could not.

Former Denver Broncos and Arizona Cardinals quarterback Jake Plummer admitted to using marijuana following hip surgery. Denver wide receiver Nate Jackson, and Buffalo Bills offensive lineman Seantrel Henderson also said they use marijuana to relieve the aches and pains of football. While players continue to call for the NFL to lift its ban on the drug, the league remains steadfast in its position, saying it adheres to “federal law and workplace policies across the country” regarding the use of marijuana.