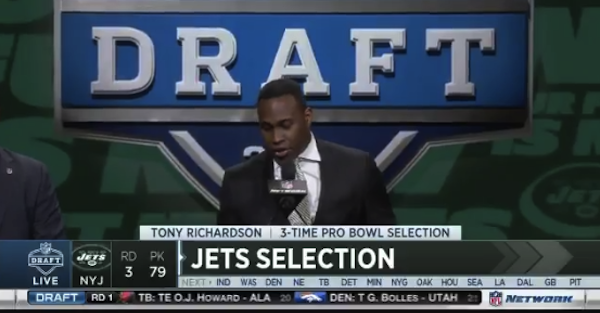 Tony Richardson played in the NFL for an impressive 16 seasons and he was, quite frankly, a tremendous player. The former Kansas City Chiefs, Minnesota Vikings and New York Jets fullback made three Pro Bowls during his time in the league and on Friday evening, Richardson was called upon to announce New York’s draft pick at No. 79 overall.

For the most part, he conveyed the energy that the Jets and the NFL would have wanted but Richardson made one unfortunate gaffe in the process.

Just googled how to spell "Jets" and this ain't it:
pic.twitter.com/l2jsp02u8n

As you can hear on the broadcast, the NFL Network crew did not jump to correct Richardson’s spelling error, as he rattled off “J-E-T-E” instead of “J-E-T-S” while at the podium. Obviously, this does not really matter in the grand scheme of things but the hiccup brought amusement to the table at a time in the draft when the eyes of the NFL fans are collectively glazed over from pure content overload.

The Jets picked up Alabama wide receiver ArDarius Stewart with the pick and he is an outstanding player and prospect. Hopefully, this pick will become known for (much) more than an inaccurate spelling by a great NFL player but at least we’ll have this moment in time.