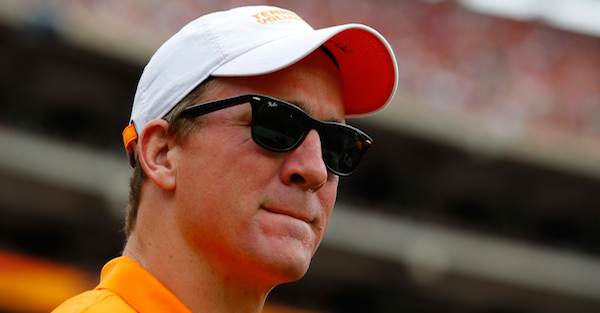 With the success of Tony Romo as a game analyst for CBS, there is real intrigue concerning networks and the ability to add recently retired players (particularly high-profile quarterbacks) for the same role. Since his retirement, there has been widespread speculation that legendary signal-caller Peyton Manning would be an obvious candidate and, according to one report, there is a battle heating up in pursuit of his broadcasting services.

Andrew Marchand of the New York Post brings word that two networks are jockeying for position:

Both ESPN and Fox have Manning atop their list to be their primetime game analyst, sources told The Post. Manning has been approached multiple times about becoming a TV analyst since he retired, but has been reluctant.

As the report indicates, this does not necessarily mean that Manning will sign with either network and the Post report also references Manning’s stated desire to move into a front office role with potential ownership ties. Still, that opportunity hasn’t arrived just yet for the former Colts and Broncos quarterback and, with the buzz surrounding the opportunities he could have right now, it may be the time to spring into broadcasting action.

FOX has a new Thursday night package to fill and ESPN still hasn’t announced a replacement for Jon Gruden on Monday night. Manning may not fill either role but it isn’t hard to imagine him doing a quality job and it is clear that interest exists on the network side.