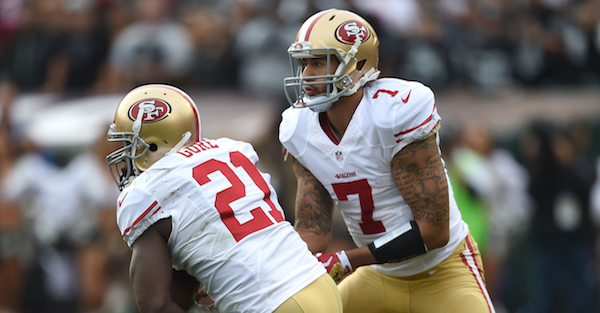 Running back Frank Gore was one of the Indianapolis Colts big acquisitions this summer, and he’s been blown away by quarterback Andrew Luck early in training camp.

During a sitdown with NFL.com, Gore did the old, “No disrespect, but…” and slammed his former quarterbacks in talking up his current signal-caller.

“I’m not knocking my other quarterbacks, I respect them other guys, but being around this guy a couple months, he’s a different breed. He’s smart. He makes me feel young. He runs the huddle. I never had that.“

Kaepernick and Alex Smith might not have been the best quarterbacks in the world, but simply not running the huddle seems inexcusable from their position.

A quarterback is supposed to be the leader of the offense, and while Kaepernick and Smith remain starters for their respective San Francisco 49ers and Kansas City Chiefs, it’s not a great sign for a former teammate to call you out in the media like this.

Whether it was meant to be disrespectful or not, it simply was.