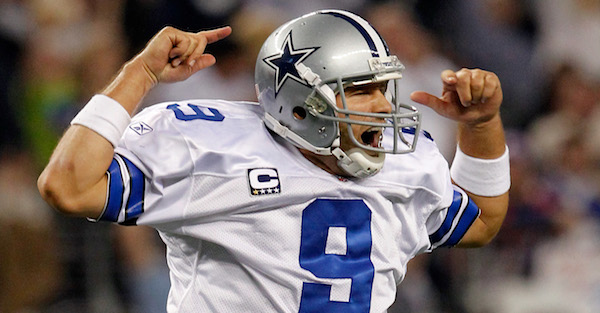 Tom Pennington/Getty Images
ARLINGTON, TX - DECEMBER 11: Tony Romo #9 of the Dallas Cowboys reacts after the Dallas Cowboys score against the New York Giants in the fourth quarter at Cowboys Stadium on December 11, 2011 in Arlington, Texas. (Photo by ston Texans

The Tony Romo situation is a difficult one, but four teams have reportedly emerged as frontrunners for the quarterback’s services, per CBS Sports.

“The Cowboys will listen to offers for Tony Romo, sources said, once owner Jerry Jones has his meeting with the Pro Bowl quarterback. Romo prefers to be moved to a contending team — specifically, the Texans, Cardinals, Broncos or Chiefs. The Bills also have significant interest in Romo, team and league sources said, though they realize that it might be a tough sell.”

Despite his injury history, CBS’s Jason La Canfora pushes directly against reports that Romo’s value won’t bring anything substantial back to the Cowboys. Instead, he reports that “some” general managers believe the Cowboys can get a second-round pick along with possibly another high draft pick.

Reports from the Broncos camp have noted Denver would only be interested in Romo if he were a free agent, as they’ve got 2016 first-round pick Paxton Lynch and former starter Trevor Siemian still on the roster.

The Texans have also spoken openly about targeting a quarterback in the NFL Draft.

If Carson Palmer walks, the Cardinals may get desperate to keep their squad in contention. Kansas City has developed into a playoff contender year-in and year-out, but there’s no indication that Romo would put the Chiefs over the top.