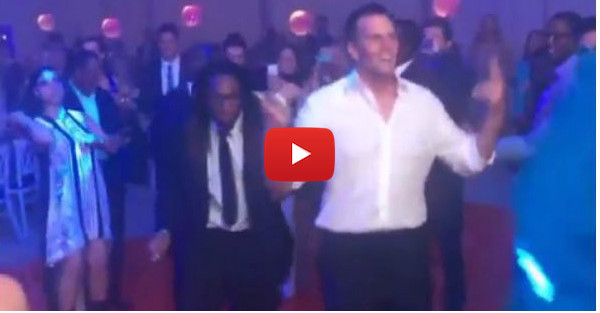 The New England Patriots received their Super Bowl XLIX rings on Sunday night. Whether you think they deserve them or if they are tainted is for another time. From the looks of it, the Patriots weren’t worried about Deflategate talk at all on Sunday. Brady, owner Robert Kraft, Bill Belichick, Vince Wilfork and Rob Gronkowski were too busy partying alongside rapper Wiz Khalifa.

Of course Gronkowski was going to dance, but seeing Brady and Kraft dance is hilarious and awesome. He isn’t worried about his four-game suspension.

Tom Brady and Julian Edelman having a dance battle to Migos. You will never have a better Monday (via @OnlyInBOS) pic.twitter.com/Tck0Hb2aYF

Who been to a party with Robert Kraft, the gronk and Tommy touchdown turnin up? Lol. Shoutout @mistercap wit the cameo

Gronk and Brady gettin it crackin at the ring ceremony party. #corporate thuggin. Thanks @wgd6788

And here’s a look at the rings that had the Patriots organization losing their minds over: