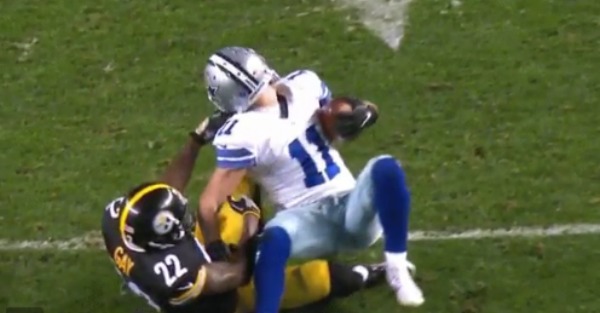 The Steelers and the Cowboys played a thriller Sunday that ended with Ezekiel Elliott lifting Dallas to a 35-30 victory with a late touchdown scamper.

But it wasn’t all smooth sailing for the Cowboys. Late in the game’s fourth quarter, wide receiver Cole Beasley nearly had his head screwed off like a bottle of Pepsi by Pittsburgh corner William Gay. After catching a short pass from Dak Prescott, Beasley attempted to elude Gay, but the defender grasped his facemask and didn’t let go.

The visual is downright frightening.

It was the closest thing you’ll ever see on a football field to that scene in The Exorcist where the girl’s head does a full 360-degree turn. Beasley’s head did about 180. Thankfully, it looked much worse than it actually was, and he walked away uninjured.