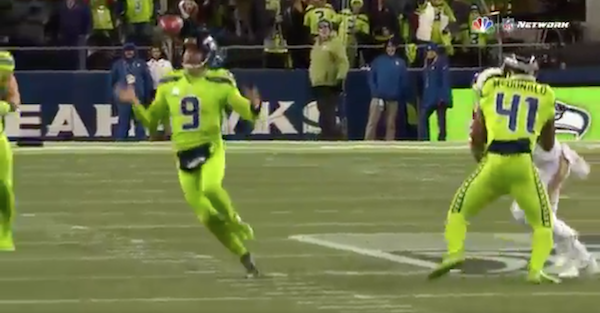 Seattle Seahawks coach Pete Carroll decided to call a fake punt up 24-3 on the Los Angeles Rams on Thursday night, and punter Jon Ryan suffered a concussion during the play.

Related: Seahawks punter that got knocked out Thursday had to be taken to the hospital

The #Seahawks run a perfect fake punt, but Jon Ryan bobbles the ball, takes a massive hit and stays down. He's headed to the locker room pic.twitter.com/EWmSXoN2AI

It’s unclear whether Ryan will be able to play during Seattle’s game against the Arizona Cardinals on Christmas Eve, but Carroll also said Russell Wilson and Jermaine Kearse can punt if necessary.

?We?ll see,?? Carroll said. ?Of course we?ll just wait it out with Jon but if he can?t play we?ll have to do something and we?ll figure it out. There?s a lot of guys who dropped notes in my suggestion box that they can punt. Guys like Kearse and Russ, they all think they can punt if we need it. We?ll have some guys. We?ll have a punt pass and kick contest this week if we need to.?

The Seahawks are currently the second seed in the NFC playoff picture, and they finish the season with the Cardinals and the San Francisco 49ers.