It looks like Tony Romo’s days in Dallas are numbered 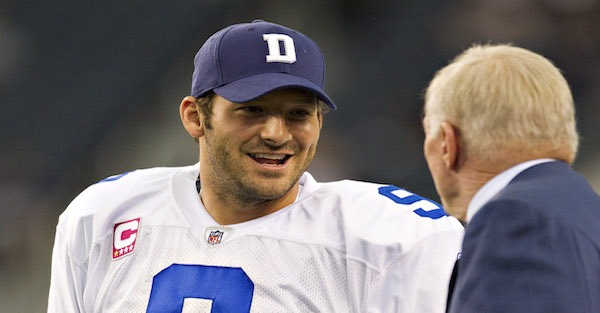 All that stuff about Tony Romo happy to backup Dak Prescott — forget that.

NFL.com’s Ian Rapoport is reporting that it’s likely Dallas will trade Romo once the season ends, and there will be a robust market for his services. The report says that Romo is eyeing Denver as a possible destination.

When #Cowboys look to trade Tony Romo this offseason, he’ll have significant say. I’m told he has eyes on the #Broncos as a potential spot.

The report also says there’s a chance Romo could retire or take a pay cut to stay with Dallas as a backup, but the trade remains the most likely possibility.

All of this makes sense. Romo should be commended for not making waves and being a team-first class act when he refused to make-waves after he lost his starting job. But for the oft-injured Romo, his playing clock is ticking. He’ll be 37 when the next season starts, so he doesn’t have much time left as an impact starting quarterback.

RELATED: Tony Romo may be saying one thing pubicly, but another privately

Denver makes a lot of sense, and he could reprise Peyton Manning’s act — leave the team he knows and loves for a place that will give him a starter’s job, and get a chance at a Super Bowl.

We know how that ended up for Manning.

While Romo is likely to have a say — really, he’ll probably dictate where he ends up — Dallas will surely engage as many teams as desperate for a QB to drive up its return. Who wouldn’t? You can image teams like the New York Jets at least checking in.

Whoever gets Romo is going to roll the dice on a player coming off a compression fracture in his back, and has had a broken collarbone, a ruptured disk and a two transverse process fractures in his back