It’s just preseason, but the Eagles’ top pick was horrendous 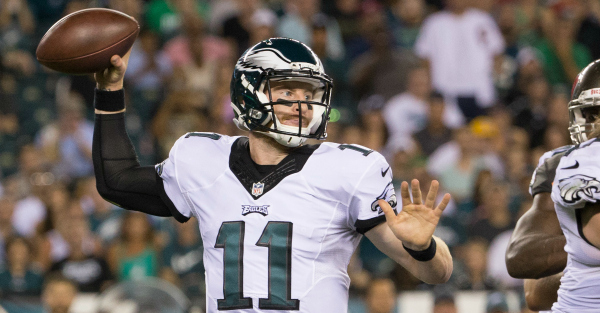 It may just be preseason, but the No. 2 pick in this year’s draft looked like a college rookie going against NFL competition.

The Eagles are pinning their future hopes on Carson Wentz, who played at North Dakota State in college. Wentz showed he still needs to improve before becoming the team’s starter.

How bad was Wentz in a preseason game against Tampa Bay? He completed 12-of-24 passes for 89 yards with one interception and no touchdowns.

But it’s worse than those pedestrian numbers sound. Pro Football Focus breaks down just how bad Wentz’s debut really was:

“He completed just one pass traveling 10 yards or more downfield, but it was under pressure where he really struggled. The Buccaneers got pressure on 11 of Wentz’s dropbacks, with the QB scrambling on one; he completed just three passes on the other 10. Adding an interception, he had a quarterback rating of 0.0 on throws under pressure.”

Yikes. The good news for Eagles fans is there’s plenty of time from Wentz to improve as a backup to Sam Bradford.