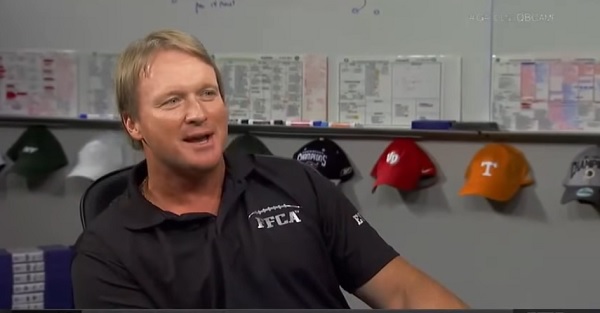 Oakland Raiders head coach Jack Del Rio said after his team’s game against the Chargers on Sunday that he had been let go by the organization.

Del Rio was 25-23 in his three years with the Raiders.

The Raiders were 6-10 this season, with the team rating below average on both offense and defense. With Del Rio gone, the popular rumor is that Oakland is opening the position for former Tampa Bay head coach Jon Gruden.

The #Raiders made the move to fire Jack Del Rio with confidence they could lure Jon Gruden from the broadcast booth. They may have their buzz heading to Las Vegas.

Gruden was also the Raiders’ head coach between 1998-2001. Gruden was 38-26 in his past tenure in Oakland, making the Playoffs twice in his four-year tenure.

Despite not coaching since 2008, Gruden has been a hot name in coaching rumors over the past two season. Gruden was most notably connected to the University of Tennessee head coaching job earlier this year, but it does not appear there were ever serious negotiations between the two sides. Tennessee wound up hiring Alabama defensive coordinator Jeremy Pruitt.