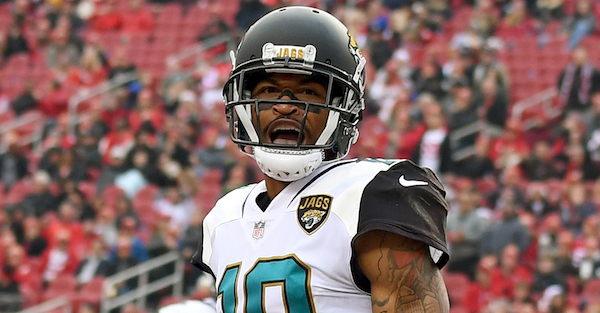 Week 16 was not kind to the Jacksonville Jaguars, as the team fell to the San Francisco 49ers by a surprising score of 44-33. However, it was a breakout showing for Jaelen Strong, as the talented wide receiver hauled in his first career touchdown catch in addition to making a strong overall impact.

Unfortunately, though, Strong’s surge as a key offensive cog was stymied in the aftermath, as the Arizona State product announced on Instagram that he suffered a torn ACL during the game.

Strong’s message was an uplifting one, saying that he “won’t question (God) now” after the injury and encouraging others to “let this be a testimony” while promising a quick and promising return.

The Jaguars will be without a potentially helpful playmaker for the rest of the 2017 season, but hopefully Strong will make a strong recovery in the coming days.