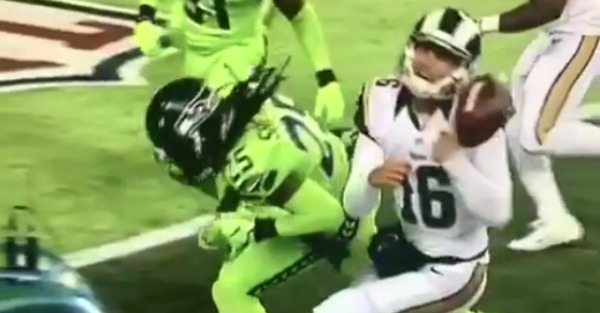 Here’s exactly why coaches preach the gospel to quarterbacks about avoiding contact—to shield them from murderous hits like this one that Seattle Seahawks cornerback Richard Sherman dealt to rookie L.A. Rams quarterback Jared Goff.

It happened in the fourth quarter of their Thursday night matchup, and unfortunately for Goff, he forgot the part about ending his scramble with a slide or quick step out of bounds, finding out the hard way that learning how to run the ball in the NFL is paramount to preserving your career.

The play was squeaky clean and drew no flags as Sherman led with shoulder. Meanwhile, Goff eventually left the field to be evaluated for a possible concussion.

Sherman told reporters after the game that he felt slighted by Goff’s apparent refusal to step out of bounds on the play.

“There was a little disrespect in his running style,” Sherman said. “He was acting like he was getting a freebie to the end zone. We don’t give free meals so he had to feel it.”

RELATED: Seahawks punter that got knocked out Thursday had to be taken to the hospital

We’d venture to guess that Goff’s still feeling it.

Fassel says QB Jared Goff is in concussion protocol. "Admire his courage, but he's got to get out of bounds," Fassel says.