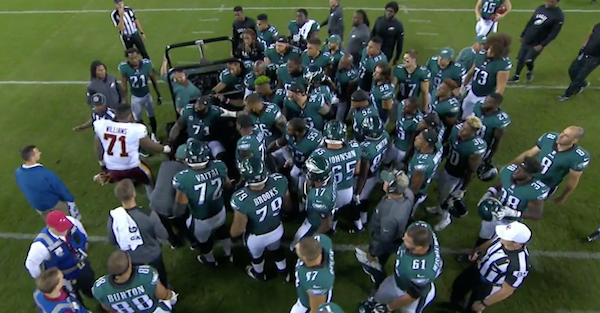 He had to be carted off the field during the game against their hated NFC East rivals.

Peters was put in a leg air cast as he was carted off the field.

The injury is devastating to a sure-fire future Hall of Famer:

.@Eagles fans chanting Jason Peters' name as he gets carted off due to injury. 🙏#WASvsPHI #FlyEaglesFly pic.twitter.com/mOtICVwpc6

Could very well be the end of Jason Peters' career, and he's leaving on a cart encouraging his teammates. HOF player, HOF leader.

Peters was (obviously) ruled out for the rest of the game.

Peters started 166 games over his 14-year career, playing five years for the Buffalo Bills and nine for the Eagles.

This is brutal news for an Eagles offense that has hummed along through the first half of the season. With Peters at such an advanced age for a lineman — he’s 35 — this could be the kind of injury that forces him into retirement.

Peters was originally signed by the Buffalo Bills after going undrafted in 2004 wanted to be a tight end, but converted to offensive tackle under the tutelage of offensive line coach Mike McNally. He won the starting right tackle job for the Bills in 2006 and was named to his first Pro Bowl in 2007. He was then traded to the Eagles in 2009 where he earned all but two of his Pro Bowl trips.