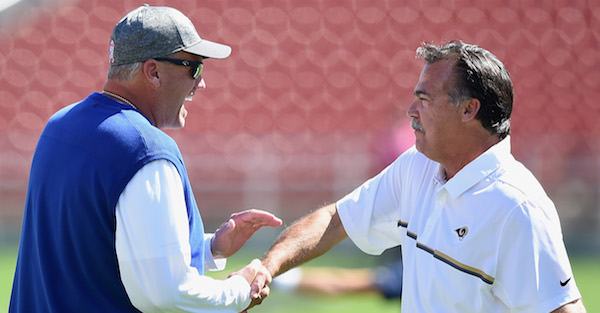 Jeff Fisher has been a punching bag in some NFL circles for a long time and that only intensified when the Los Angeles Rams took off immediately after he vacated the premise. However, the long-time head coach doesn’t necessarily see it that way, as he visited with The Midday 180 on Friday (h/t ESPN) and seemingly attempted to take a bit of credit.

“I’m a huge fan of the Ram players. They’re basically — I don’t want to say my players, but I had a lot to do with that roster. Left them in pretty good shape. And Sean, as he’s proven in this very short period of time, is an outstanding young coach. And he’s got the offense rolling, which they needed.”

In some ways, Fisher is right that the roster can be attributed to him in some way. In the same breath, the counterargument would be that the Rams floundered under his tutelage and it took the new voice with Sean McVay to unlock everything.

In addition, Fisher reflected on the play of Jared Goff, who famously struggled in 2016 under Fisher.

“We knew that was coming,” Fisher said. “… That’s why we traded up with you guys here [the Titans] to get him, because we knew he had that kind of potential. We felt like both the quarterbacks had a chance to be franchise quarterbacks. We were right. Philly got theirs, and the Rams got theirs.”

This will be an argument any time a coach leaves and his replacement immediately succeeds but, given Fisher’s track record, it is harder to take his side in this particular one.