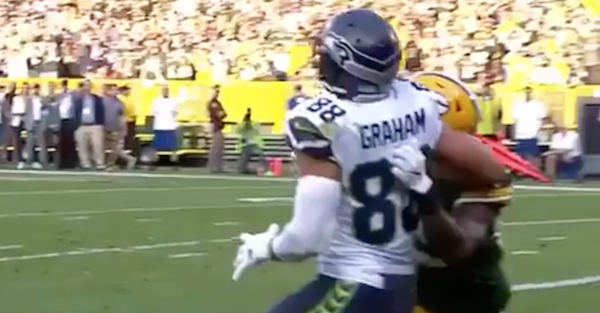 If it weren’t a matchup between the Packers and Seahawks, I probably would have said we magically transported into a different dimension last night.

There is no way ? no way in the world ? what happened to Jimmy Graham on Sunday wasn’t passing interference.

A lot of contact on Jimmy Graham… Kind of surprised the refs didn't call this one. #Seahawks #GBvsSEA pic.twitter.com/GXIQATuI7P

If they had signaled it was uncatchable, then it would be a little more understandable because catch radiuses are extremely difficult to determine on the fly. But they didn’t. And if you’re trying to say that ball was catchable and the play was clean, you’re out of your mind.

Now, Green Bay ended up winning the game, 17-9. And that missed call didn’t determine the game for Seattle. But missed calls like this contribute to the flow of the game.

Maybe you can call it karmic justice for the touchdown that Golden Tate stole a few years back.

But Graham was mauled on the play, and a flag should have been thrown.