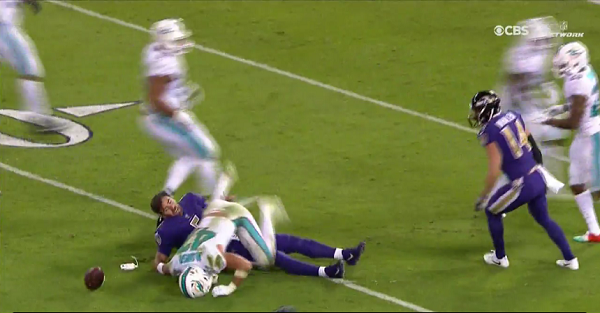 Former Super Bowl winner Joe Flacco took a nasty hit on Thursday Night Football from Miami linebacker Kiko Alonso. It was so bad that he was immediately taken back into the locker room and you can see why here:

He was immediately brought back to the locker room and put in concussion protocol:

Ravens made it official and announced Joe Flacco is in concussion protocol.

Here’s another look at the hit with some zoom:

Somehow Kiko Alonso was not ejected for that hit and is still playing in the game. He is likely to get a fine for that one as it resulted in a penalty for unnecessary roughness and took the QB’s helmet off.

According to Tracy Wolfson on the CBS telecast, Flacco has been ruled out for the game with a concussion.