Joe Montana was asked if Tom Brady is the greatest of all time, and his answer is certainly surprising 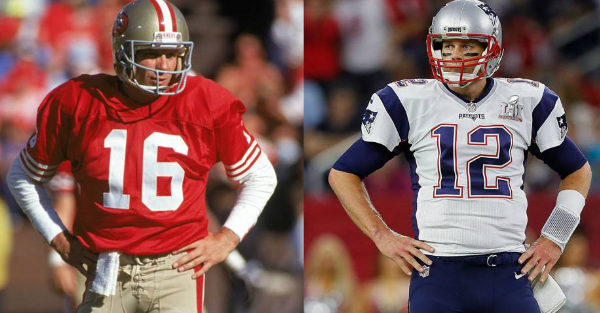 Who’s the greatest quarterback of all time?

That’s open for debate, even though many have Tom Brady — he of five(!) Super Bowl rings — at the top of the list.

Joe Montana, a Hall of Famer and former great quarterback himself for the San Francisco 49ers,  has a non-committal take.

In remarks that will air on the Hallmark Channel tonight — and captured by TMZ.com — Montana won’t say Brady is the G.O.A.T, and he had a good reason for it.

“He’s obviously having a tremendous career. I think it’s really hard to put anyone in that bucket. Even before he got five,” Montana said. “You look back to some of the guys — some people don’t even know — Sammy Baugh or Otto Graham, and I can’t remember which one, but one of them won like seven or nine championships. So far ahead of their time. It’s hard to compare guys from then to now, and how they would compare here and how we could compare back then.”

For the record, it was Graham, who lead the Cleveland Browns, of all teams, to 10-straight championship games.

So, how does Brady compare the old-timers like Johnny Unitas and more contemporaries like Montana and John Elway?

That’s the beauty of sport. You can debate it, like here.