Josh Allen, a 56-percent passer, says the data doesn’t do his game justice 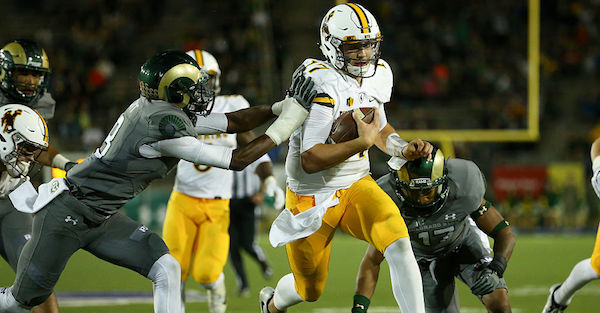 Justin Edmonds/Getty Images
FORT COLLINS, CO - OCTOBER 1: Quarterback Josh Allen #17 of the Wyoming Cowboys splits the defense of defensive back Braylin Scott #18 and defensive back Shun Johnson #17 of the Colorado State Rams on his way to running for a touchdown during the third quarter at Sonny Lubick Field at Hughes Stadium on October 1, 2016 in Fort Collins, Colorado. (Photo by Justin Edmonds/Getty Images)

Josh Allen was already a polarizing NFL Draft prospect prior to this week. Now, however, people have begun to hear the former Wyoming Cowboys quarterback’s thoughts on plenty of things, and his viewpoints appear to be something.

Not only did Allen subtly blame his wayward performance on his teammates, but he also stated he wouldn’t mind going to Cleveland because he feels he could be immortalized there.

So, what did Allen say that has everyone hot and bothered yet again? Basically, his numbers in college aren’t doing his game justice.

One has to remember that Allen, himself, said the issue this past season was his teammates:

?I went back and got better as a person and a player. I lost a running back, receiver, tight end, and a center all to the NFL. We played lots of young guys. It was different. I had to put everyone on my back and say we can do this,? he told 92.3 The Fan.

And yet, the season before, with all those pros, he was still only completing 56-percent of his passes.

As for him being immortal:

?If I?m fortunate enough to become a Cleveland Brown, you can expect everything from me,? Allen told Bull and Fox Monday afternoon on 92.3 The Fan. ?I want to be the guy that turns around the Cleveland Browns. The guy that does that is going to be immortalized in Cleveland forever.?

Allen only went 16-11 with Wyoming during his collegiate tenure. Luckily, most NFL Draft experts believe him to be one of the best at his position in this class because of reasons they can’t quantity with data.