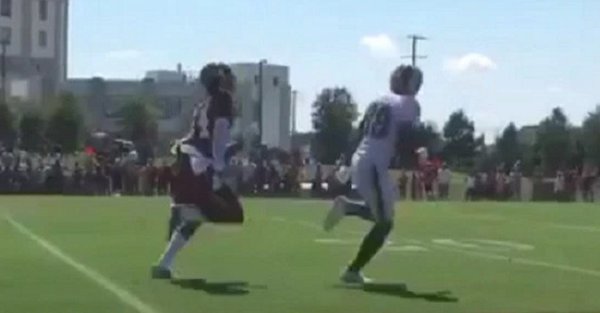 While some lamented the smack-talking cornerback as the best at his position, others clamored that he was a product of an already elite defense.

Those claiming the latter loved what they saw over the weekend, when Norman, the NFL’s highest-paid cornerback ($75 million over five years) got absolutely toasted in coverage.

Norman, whose verbal battering of Odell Beckham Jr. exploded into one of the nastiest one-on-one matchups in recent memory, was first exposed by Desean Jackson above.

Then it was Pierre Garcon who shredded Norman in coverage.

Whether it’s an in-shape thing, or a coverage thing, Norman better get ready because he’s got two meetings against Jordan Matthews (Philadelphia Eagles), Dez Bryant (Dallas Cowboys) and Beckham Jr. (New York Giants) twice a year for the next five seasons.

It could be a rough go for the elite defensive back.