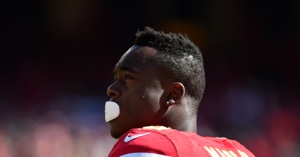 The Kansas City Chiefs have been one of the most consistent teams in the NFL in the last few years under Andy Reid, and one of the biggest reasons why has been Jeremy Maclin’s presence on the offense, but Friday night he was released by the team.

The Chiefs’ decision to cut Maclin, a position that that they’ve struggled to find consistency in the last few years, is a puzzling one for a multitude of reasons. Rapoport pointing out the Chiefs aren’t saving a significant amount of money — they’re reportedly eating $7 million in dead money against their cap by releasing him — so perhaps there’s more to his release than just for financial reasons.

Maclin is still just 29-years-old and signed a huge contract with the Chiefs worth $55 million just two years ago.

The former Missouri Tiger only accumulated 44 receptions and two touchdowns for the Chiefs in 2016, but his release is still a major head-scratcher.