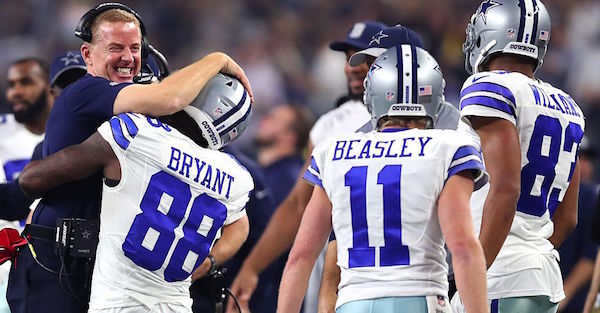 Tom Pennington/Getty Images
ARLINGTON, TX - DECEMBER 26: Head coach Jason Garrett of the Dallas Cowboys celebrates with Dez Bryant #88 after Bryant threw a touchdown pass against the Detroit Lions as Cole Beasley #11 and Terrance Williams #83 of the Dallas Cowboys look on during the second half at AT&T Stadium on December 26, 2016 in Arlington, Texas. (Photo by Tom Pennington/Getty Images)

When Tony Romo decided to retire in the offseason, some questions arose about the Dallas Cowboys’ depth at quarterback.

Would they sign free agent Colin Kaepernick to back up Dak Prescott? Would they select a QB late in the draft? Instead of making a move for another QB, the Cowboys opted to stick with Kellen Moore, who was injured last season but has been with the team since 2015.

Moore, who is the winningest quarterback in college football history after posting a 50-3 record at Boise State, received plenty of praise from teammates and coaches during the offseason.

“He’s just a positive for our team,” wide receiver Brice Butler said according to the Dallas Morning News. “There’s no doubt that if he has to go in, he’ll take advantage of his opportunity. There’s nobody on this team that doesn’t think Kellen can do it because we’ve all seen it.”

Receiver Cole Beasley said Moore is “exceptional,” and he called Moore a “gamer.”

Moore threw for 435 yards in a 2015 game against the Washington Redskins. Assistant coach Scott Linehan said Moore is “like a machine” with the way he can read defenses and anticipate which receivers will become open.

The Cowboys have confidence in Moore, who re-signed with the team in the offseason.

“I know who I am,” Moore said. “I’m not a big-arm guy, I’m not a 6-5 guy. I kind of move around in the pocket to see a few things sometimes. But the bottom line is you execute, you get completions and move the team down the field.”

Dak Prescott was extremely durable last season for the Cowboys, but the team seems very confident in Moore if Prescott has to miss any time next season.