If you asked the average college football fan who Kenny Pickett was going into the 2021 season, most wouldn't have known who he was. The Pittsburgh Panthers quarterback was going into his fifth year at the program and fourth as starter, but he had more of a reputation as the guy who had been in college for a decade. (We call this the Perry Ellis effect).

That is, until Pickett had one of the better quarterback seasons in recent memory.

He threw for 4,319 yards and 42 touchdowns to seven interceptions while leading Pitt to an ACC Championship -- the program's first conference title since 1976. He was a Heisman Trophy finalist -- finishing third behind winner Bryce Young and Michigan defensive end Aidan Hutchinson -- and earned first-team All-American honors along with being named the ACC Player of the Year.

Pickett went from a run-of-the-mill QB to one of the sport's breakout stars. It wouldn't have happened without Peyton Manning. 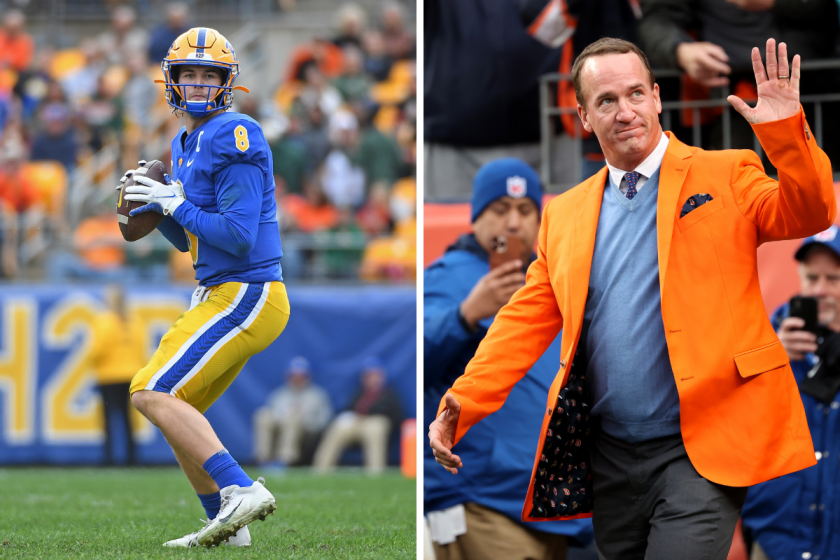 RELATED: Kenny Pickett's Fake Slide Helped Pittsburgh Win the ACC Title, But Should it Have Been Legal?

Pickett had a decision to make after his junior year. Enter the NFL Draft or return to school? He turned to a guy who faced the same decision back in his day -- the one and only Peyton Manning.

Pickett built a relationship with Manning during his two years as a counselor at the Manning Passing Academy. So, in the middle of the decision-making process, Pickett asked Manning for his honest opinion.

"The consensus I'm getting is Round 5. Is that where you see yourself as a player?" Manning told Pickett, per ESPN.

The decision was made on the spot.

"It was a quick answer for me -- no," Pickett recalled. "I knew right then that I was coming back. I have a lot of confidence in what I can do, and that's not where I saw myself. I wanted to come back and give it one more shot, prove where I belong and prove that we were capable of having a special season at Pitt."

It was fitting that Manning, who returned for his senior season at Tennessee after flirting with the NFL Draft as a junior, was the one who helped Pickett come to a conclusion. Staying worked out for Manning, and it worked out for Pickett, too. Now, the former Pitt signal-caller is expected to be one of the first QBs taken in the 2022 NFL Draft. 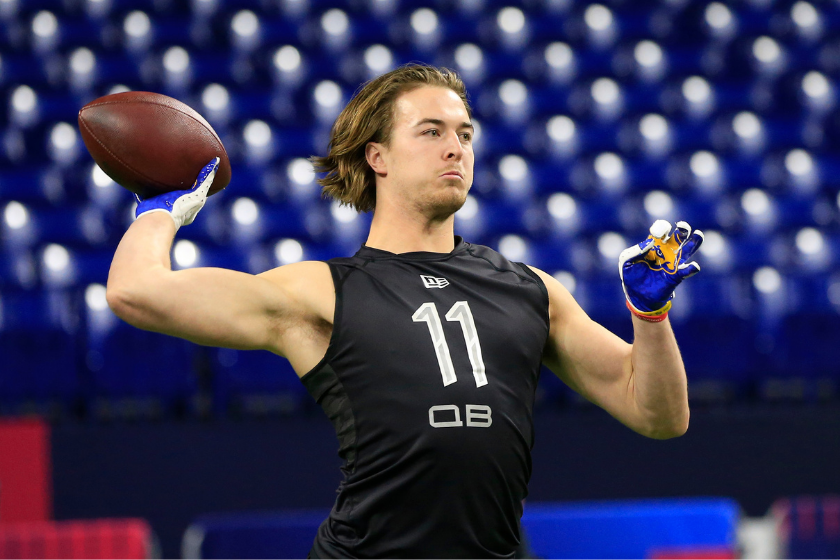 Pickett's breakout season did him wonders by putting his leadership abilities and accuracy on display. He also sports a 6-foot-3, 220-pound frame and will enter the league as one of the class's most mature players. Pickett will turn 24 before he plays his first pro game, making him close to Joe Burrow's age when he was a rookie.

However, the Pitt QB prospect has drawbacks. His 8.5-inch hand size made waves at the NFL Combine back in March for being smaller than every starting quarterback in the league. Hand-size should be the only attribute looked at when evaluating a quarterback in my opinion, but scouts shouldn't be too concerned. Pickett's trademark gloves will help with his grip, and seasoned pros like Teddy "Two-Gloves" Bridgewater, Matt Ryan and Tom Brady don gloves these days.

Liberty's Malik Willis is expected to be the first QB taken off the board. Pickett, Ole Miss' Matt Corral and Cincinnati's Desmond Ridder are in the mix for the second. ESPN's Mel Kiper Jr. predicts Pickett will emerge out of the group. He has the Pittsburgh Steelers selecting the hometown kid with the 20th overall pick in his latest mock draft.

"Id feel much more comfortable taking Pickett here than I would in the top 10. Best-case scenario is that he's Derek Carr, and his floor is as an Andy Dalton-type, which isn't a bad quarterback by any means. Pittsburgh can win with that. Still, those two were taken in Round 2 and didn't have Round 1 expectations surrounding them. If Pickett falls into the Steelers' laps here, he'd be tough to pass up. And he has a little more upside than Mitch Trubisky."

Kenny Pickett would've been a fifth-rounder buried on someone's depth chart had he decided to come out last year. Thanks to Peyton Manning's aid, he has a chance to be a franchise quarterback from the get-go.