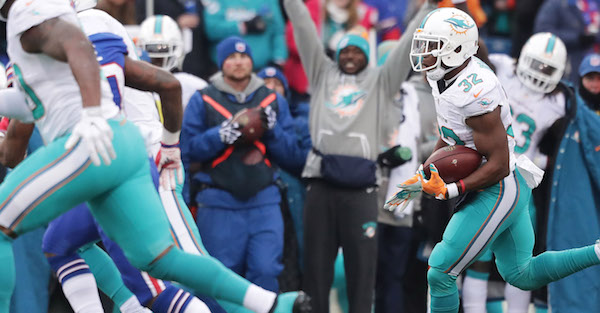 So far, it’s been a pretty rough preseason for the Miami Dolphins.

Before even taking the field for their 23-20 preseason win against Atlanta, the Dolphins lost quarterback Ryan Tannehill for the season after having surgery on his ACL. Then starting running back Jay Ajayi was banged up, and he’s still in concussion protocol.

Now, another offensive weapon is having some health issues.

A trainer helped Drake walk off the field, and he did not return to practice.

As long as Ajayi and Drake are sidelined, look for running backs Damien Williams and Storm Johnson to handle most of the work out of the backfield. Senorise Perry and De’Veon Smith are also listed on the roster.

While Ajayi has become the workhorse in Miami’s running game, Drake has found a role on special teams. In 2016, he returned 13 kicks for 397 yards and a touchdown. When given a chance to work out of the backfield, Drake contributed a little, having rushed for 179 yards and two touchdowns on 33 carries.