Knowing he’s got garbage depth at QB, John Elway takes a clear shot at his gunslingers 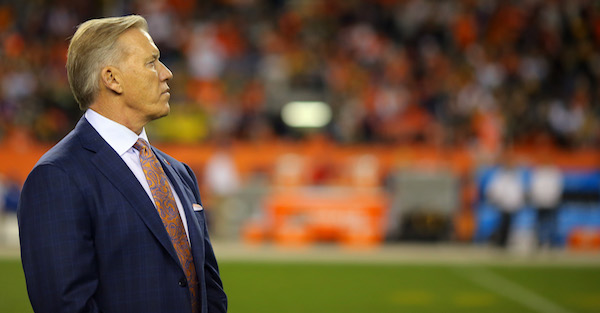 Justin Edmonds/Getty Images
DENVER, CO - NOVEMBER 01: John Elway, General Manager and Executive Vice President of Football Operation for the Denver Broncos, looks on as Pat Bowlen is honored with an induction into the Broncos' Ring of Fame during the game against the Green Bay Packers at Sports Authority Field at Mile High on November 1, 2015 in Denver, Colorado. (Photo by Justin Edmonds/Getty Images)

Don’t expect the Denver Broncos to lead the NFL in passing yards. Don’t even expect them to lead the AFC West. Neither Mark Sanchez and Trevor Siemian have been named the starting quarterback and likely won’t be anytime soon with the competition between the two “very close.”

RELATED: John Elway lost a Hall of Fame quarterback but says the Broncos are better

Coach Gary Kubiak and executive vice president John Elway are more than willing to rely on everyone not named Sanchez or Siemian (or Lynch) for wins.

?The good thing is we?ve got a good enough team around them,? Elway said, via USA Today. ?We?ll be able to run the ball, and we won?t throw them out there and say, ?You guys have to go win this.? Do your job, make good decisions and keep the team in position to win. And that?s really all we?re asking of that position right now.?

That’s without naming the Broncos top-tier defense as a crutch for their laughable quarterback situation.

Current situation aside, Elway is still trying to view their situation with a positive spin.

?There?s still a lot of football,? Elway told USA TODAY Sports. ?Mark?s new in the system. Trevor doesn?t have experience and neither does Paxton.”

The Broncos were able to use their surrounding pieces last season with Peyton Manning and Brock Osweiler at the helm, winning a Super Bowl nearly in spite of their quarterbacks.

No one knows if lightning will strike twice, but it’s a decent model to use considering how it worked out last season.