NFL player finishing medical school, pushing to have “M.D.” on the back of his jersey 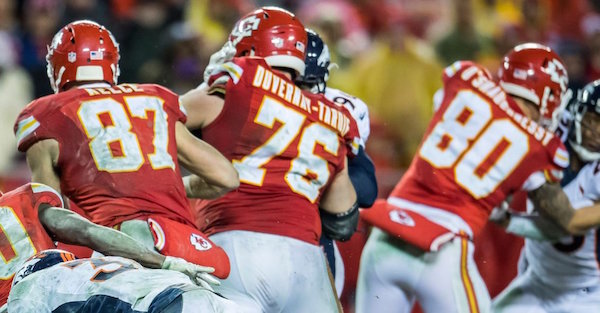 Kansas City Chiefs offensive lineman Laurent Duvernay-Tardif, who is on pace to earn his medical degree this offseason, told the Kansas City Star that he intends to become the first player in NFL history to have “M.D.” on his jersey.

“I want to put Duvernay-Tardif M.D. on my jersey,” Duvernay-Tardif said. “I’ve already started a conversation with the league office, and they say that anything is possible.”

Last year, the lineman revealed his goal to become the first active NFL player with a medical degree during a piece for the Players Tribune.

“I’m hoping to become the first NFL player to step on the field with an M.D. in my back pocket — and maybe on the back of my jersey.”

The Canadian-born football player has also kept busy this offseason by contributing to Radio-Canada’s Winter Olympics coverage as a reporter in Pyeongchang.

“It was just a tremendous opportunity,” he told the Kansas City Star. “I’ve always wanted to go to the Olympics.”

There’s no denying that Duvernay-Tardif is quite the renaissance man on and off the gridiron.