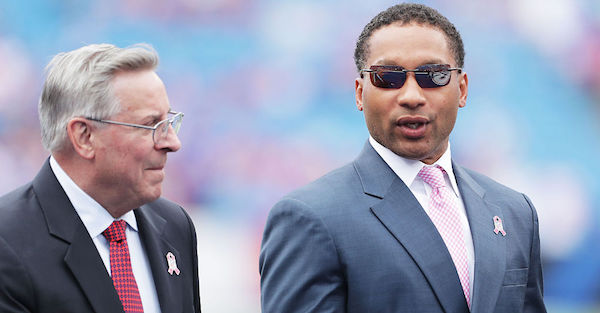 Doug Whaley could soon be out as the general manager of the Buffalo Bills.

The Bills have given new head coach Sean McDermott more pre-draft responsibility than Whaley. McDermott will be handling the Bills’ annual pre-draft luncheon, which is something the GM has done in the past.

Jerry Sullivan of the Buffalo News thinks Whaley will be fired sooner rather than later.

“Barely a year ago, in a transparent attempt to show unity in an embattled organization, the Bills gave Whaley a contract extension,” Sullivan wrote. “Then, when the Rex Ryan experiment went up in flames, they fell for the first competent football coach who walked through the door and handed McDermott the keys to the kingdom.

“The dignified move for Whaley now would be to resign. But why would he quit when he can wait for Kim and Terry Pegula to run him off, adding him to the lengthening scroll of coaches and executives that they’ve paid not to work?They should fire Whaley right now and be done with it. Stop the charade that he’s still empowered. Put him out of his misery. If this goes on much longer, it’ll make their decision to fire Darcy Regier seem hasty and impulsive by comparison.”

Though Sullivan suggested Whaley should resign, he might wait and force the Pegulas to fire him so they have to pay him the remainder of his contract. With McDermott seemingly calling the shots, it seems as if Whaley’s time in Buffalo is limited.

Whaley has been the GM in Buffalo since May of 2013. The Bills are 30-34 with no playoff appearances during Whaley’s tenure.