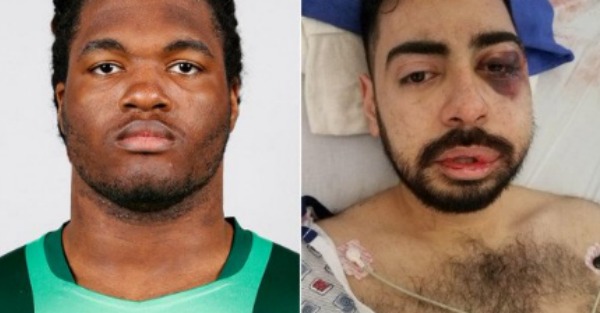 New York Jets linebacker Lorenzo Mauldin has been arrested on suspicion of assault, a misdemeanor, after a New York man alleged the football player beat him up, according to a report on TMZ.com.

Mauldin turned himself into police, TMZ reported, and he faces up to a year in jail if convicted.

The arrest comes after Jean Lopez, of Queens, NY., field a civil lawsuit against Mauldin, alleging that the linebacker beat him outside of a nightclub over spilled champagne, according to a report in the New York Post.

Jets' Lorenzo Mauldin allegedly attacked a man, devastating his face and sending him to the hospital: lawsuit https://t.co/C32E4phxcF

Lopez  alleges he was pummeled black and blue. The Post said Lopez spilled champagne on a man, and was then twice punched in the face outside of a New York City nightclub. Lopez’s attorney, Glenn Race, said his 5-foot-7, 145 pound client suffered facial fractures that needed surgery to fix.

The Post reported Lopez filed a complaint with police following the incident, saying he was punched once in the eye and once in the jaw, but couldn’t identify his attackers.