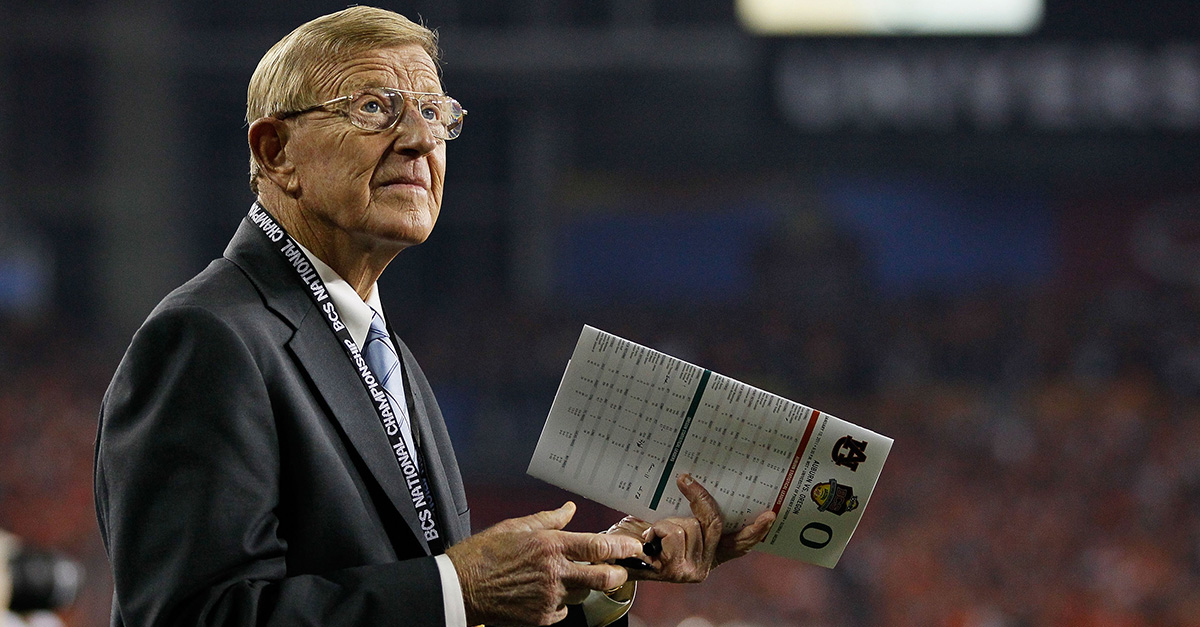 Legendary Notre Dame football coach-turned-television-analyst Lou Holtz knows a lot about football, but he really missed the mark recently when trying his hand at social and political issues.

Holtz appeared on FOX News as a guest on Tucker Carlson’s nightly show. The long-time coach has seen a lot of football and knows plenty about the game and the culture that comes along with it, but he apparently could not figure out why NFL players were protesting this past weekend.

In fact, because nobody came out and outright said it, Holtz couldn’t seem to figure out what the big deal was as you can see in this clip from the show:

WATCH: Lou Holtz compares the black experience with cops to him getting a ticket from police fan of another team. pic.twitter.com/t7v3oy2WKv

Here’s what he said as transcribed by The Spun:

Of course, many around the NFL were protesting President Donald Trump, who called NFL players who protested “sons of bitches”, and called for the owners to fire those players for protesting.

Many in the NFL came together against Trump this past weekend, but he’s drawn the ire of many in the sports world.

Of course, this all started with Colin Kaepernick, who kneeled for the National Anthem in protest of police brutality against minorities in the United States.

That’s a real problem that has to be addressed and one that has been an ongoing discussion over the past few years. For his part, though, Holtz felt that he himself has been a victim of “police brutality” and that it’s just something that’s a part of life.

Here’s what he said:

?There?s an awful lot of things that happen in this country, but I want you to know, I?ve been unfairly ticketed. I was given a ticket when I didn?t exceed the speed limit, because I was coaching at one school, and the patrol officer graduated from the other, and he let me know he was bitter about this. That happens in life,? he said.

If that’s not a false equivalency, nothing ever will be.

Needless to say, his take on the situation hasn’t held up well in the court of public opinion.