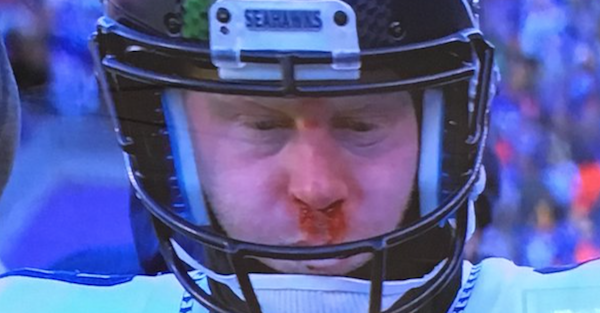 A low snap results in the indignity of a punter faceplant pic.twitter.com/mYrqlyMKay

Seattle Seahawks punter Jon Ryan picked the wrong afternoon to smash his face into the turf.

In the third-coldest game ever, a low snap resulted in Ryan attempting to secure the first down on a run, when he hurdled and landed directly on his face.

Is that bloody frozen snot??? 😳 pic.twitter.com/pyBRVXPXZk

The next day, he doesn’t look much better:

You should see the other guy. pic.twitter.com/VFNSNehcu9

The Seahawks survived the frozen tilt in Minnesota will travel to a much more manageable Carolina this weekend to face off against the Panthers.